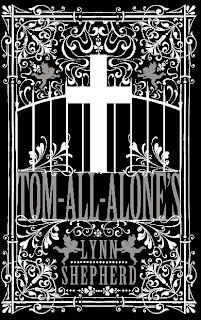 Tom-All-Alone's is a kind of literary whodunnit,  and I mean that in a good way, featuring characters from Bleak House and The Woman in White, as well as a brilliant set of personalities of the author's own invention. I have the feeling that if Dickens were writing today about the London he knew, for today's audience, he might very well have come up with a novel a bit like this one.
Lynn Shepherd uses a refreshingly traditional narrative voice that is both distant yet avuncular when describing its main character. He's a private detective named Charles Maddox, formerly of the 'Detective' branch of the metropolitan police where he worked alongside Inspector Bucket, whom you may recall from Bleak House.
We first meet Charles living in a squalid room with his cat, Thunder (amazing just how cats seem to pop up in whodunnits!), working for his sole client - a missing person case he is unlikely to solve - when the solicitor, Edward Tulkinghorn, employs him to track down a blackmailer who is threatening the rich and powerful men Tulkinghorn represents.
At the same time, Charles's personal life undergoes a complete change, when he finds he must look after his aging uncle, the famous detective that taught Charles much of what he knows. Uncle Maddox is suffering from dementia, but has lucid moments that prove useful.
With Maddox's help, Charles discovers the whereabouts of the blackmailer, but a mysterious fire engulfs the criminal's house, killing all within and many impoverished neighbours. Charles begins to distrust Tulkinghorn and the two are soon set against each other as Charles determines to uncover the secrets that the lawyer is at such pains to suppress.
Suddenly the book becomes peppered with characters, much like a Dickens novel: there is the Maddox household (which includes Stornaway, an aging Scottish retainer, and Molly, an African  servant who never speaks); there are the people connected to the case (a Cornish tanner, a blond prostitute that reminds Charles of his long lost sister, fellow officers from the force, crossing sweepers and gutter snipes).
Running parallel to Charles's story is that of Hester, the ward of a Mr Jarvis, who forms a particular friendship with the lovely Clara, who has a mysterious illness. It all seems a lot like Bleak House and the reader can only wonder about the connection with Charles's case.
Before the end of the book, there will more murders, including two that bear an uncanny resemblance to the work of Jack the Ripper. Charles's life will be under threat numerous times - it is lucky he is such a fit and well muscled young man, and he'll also come under suspicion himself by the ever lurking Inspector Bucket.
All in all this is a rip-snorter of a story, uncovering so evil a set of wrongdoers any picture you might have had of Dickensian London seems suddenly even bleaker. What makes it all worthwhile, is the character of young Maddox and the wonderful prose of the writer. Lynn Shepherd has just published the next of Maddox's adventures, A Treacherous Likeness about the Shelleys (Percy Bysshe and his wife Mary, author of Frankenstein). Definitely one for my 'must read' list.