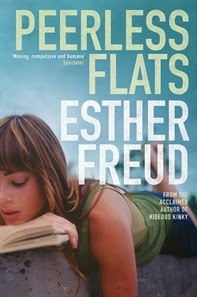 Peerless Flats is Esther Freud's second published novel after her well-regarded debut, Hideous Kinky, which was made into a film staring Kate Winslet. As a result, perhaps Peerless Flats suffers a bit from second novel syndrome, after all the only place I could find it was at a second hand book fair. But as a big Esther Freud fan, how pleased I was I did.
Although it doesn't have the exotic location of Hideous Kinky's Morocco - instead this book is set in a London council estate horribly run down and full of people who are plainly struggling - the novel has a wonderful main character and a lively narrative style that draws you in.
Arriving in London, sixteen-year-old Lisa and her mother Marguerite are desperate for somewhere to live, and happy to accept anything short term. But when they are offered a place in Peerless Flats, they are disappointed to discover they have been allocated a one bedroom flat, which turns out to be nothing more than a bed-sit.  Where will little bother Max sleep? They can't even get into the toilet, because an intruder has left by the window, leaving the door locked on the inside. Things don't bode well.
As with Hideous Kinky, the narrator's mother is quite hopeless - a bohemian type not really up to the task of bringing up children on her own, setting no boundaries in case Lisa rebels and leaves home, just as older sister Ruby did to live with dodgy boyfriend, Jimmy. Dad, a professional gambler, can be approached for a stop-gap bit of cash and the odd meal out, but really doesn't do a lot of parenting either.
The book is mainly about how Lisa survives the following months, waiting to attend her drama school, and trying to keep things as normal possible, if only she knew what 'normal' really meant. She hangs around pubs to meet Ruby, where she makes a connection with Quentin, a failed drug dealer from Ireland. Meanwhile Ruby has drug addiction problems of her own and associated health issues.
It could be rather depressing. But Lisa is surprisingly sane, buoyant in that she keeps trying for the best and is not such a self-absorbed teenager that she has no empathy for those around her. She's busy too, especially where Ruby is concerned and there are lots of journeys across London and the atmosphere of a big city.
Then there's the writing - fresh, immediate and very real. Freud is great at this kind of thing, seeing a tenuous lifestyle through the eyes of a young person. It could so easily all go so wrong for Lisa but somehow there always seems to be hope, just a bit anyway, and it is this hope that sees Lisa and the reader through.
Posted by Caught Up in a Book at 13:17