Where Angels Fear to Tread by E M Forster 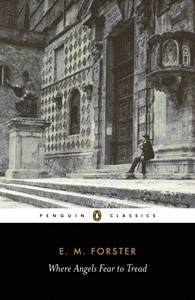 Holidays can be dangerous affairs. A change of scene may lead to impulsive decision-making with worrying consequences. So it seems to be for Lilia Herriton in E M Forster's novel, Where Angels Fear to Tread. Lilia, a well-off and pretty young widow, leaves her daughter in the care of her mother-in-law to take a holiday in Italy.
Mrs Herriton and her spinster daughter, Harriet, are relieved Lilia will be travelling with sensible and practical, Caroline Abbott. In their mind, Lilia has always been a flibbertigibbet and having little Irma to stay will be a chance to teach the child some manners.
However, a distressed letter from Caroline alerts the Herritons to the worst - that Lilia has fallen in love with a young Italian named Gino, a dentist's son with few prospects. Lilia's brother-in-law, Philip Herriton, who had recommended the holiday in the first place, is sent off to bring Lilia home, only to discover that the damage is done and that Lilia has already married. It seems there is nothing more but to leave her to her fate and return to England.
When a Lilia dies in childbirth, Miss Abbott and the Herritons decide the baby must be brought back to have the benefits of an English upbringing. Philip and the disapproving Harriet are dispatched again in the wake of Miss Abbott. The women leave Philip to  persuade the doting father that his son is better of with the Herritons in England.
A lot of this book is very humorous - the characters reveal the worst of living in a narrow society, in this case the Herriton's home of Sawston, where everyone seems to know everyone else's business and appearances are everything.
Compared to this, Italy, as Philip knows, is a wonderful place, full of beauty and freedom. This is personified in the character of Gino, who everyone can't help falling in love with. Philip and Gino become for a time good friends, and Italy even works its charm on the sensible Miss Abbott.
Yet danger lurks in the background, and the sudden tragedies that occur give the novel an edginess that lifts it above a simple comedy of manners.  Forster does this with a wonderful lightness of touch, however, so that the reader is not left too much in a state of shock. The ending is sensibly open-ended, which makes the book seem very modern.
This is a short novel, but the more you think about it the more it seems to say. What is marvellous about it too, is that I was able to download it on to my e-reader for free, thanks to Project Gutenberg, although this Penguin Classics edition also looks very nice.