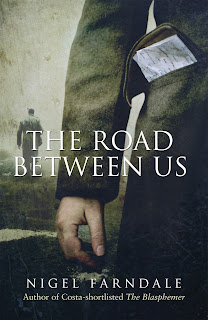 It can be an unsettling experience to read a novel thinking it is about one thing, only to discover it is really about something quite different. This happened to me with The Road Between Us, a beguiling title that really could mean anything. The cover shows two men, one in the distance, the other wearing army uniform with a letter in his pocket.
The men turn out to be Charles and Anselm, caught out by the authorities for 'conduct unbecoming' in a Piccadilly hotel room just before World War Two begins. They are both artists who met at the Slade, and they are devoted to each other.
Charles loses his RAF commission and struggles to find something meaningful to do during the war, until he gets involved with a sailing friend rescuing troops from Dunkirk. This inspires him to do some drawings that are good enough to be published, and Sir Kenneth Clark arranges for him to be an official war artist. But all the while he's wondering what has become of Anselm, who has returned to Germany.
Here, homosexuals are sent for 're-education' in work camps and this is how Anselm ends up in one of the smaller concentration camps in Alsace. There are some particularly grim chapters describing the horrors of the treatment of prisoners, who are mainly from the French resistance. The only thing that keeps Anselm going is the certainty that one day Charles will rescue him.
Interwoven with this story is that of Edward, a career diplomat, newly released after being held captive in an Afghan cave for eleven years. His only hold on sanity has been the thought that one day he will be reunited with his beautiful wife, Frejya. His great friend Niall, who is there when he wakes up, has to tell Edward that his wife is dead, while his daughter, Hannah, has grown up to be the very image of her mother.
Niall is there, a shadowy figure in the background, obviously concerned for Edward and Hannah, and the readjustments each has to make. But troubling questions hover: Did Frejya kill herself? Who paid the ransom that led to Edward's release? For the reader of course there is the question of what links the two stories.
It's not long before it is obvious that Charles is in fact Edward's father, now in his nineties and suffering from dementia. It is a shame that they cannot talk to each other because both have suffered greatly in different wars and been redeemed by love. The mysteries of Edward's birth and upbringing, his connection with a wealthy German banker are not revealed until the end, giving the reader plenty to be curious about.
I'd been looking forward to reading The Road Between Us because I had found Nigel Farndale's first novel, The Blasphemer, a truly powerful story, compelling, assured and thrillingly plotted. This novel is similarly well paced and immensely thought-provoking. There are many important stories to be told about the damage war can do. Tackling the subject of love without sentimentality, while going into the darker corners where love can take people, makes this a more daring and original story.