Summer on the River by Marcia Willett 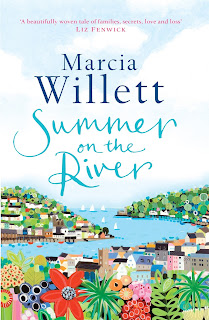 I've always been meaning to read a book like this, the kind with an attractively artsy cover that makes you think of summer holidays. You feel you will be in for a gentler kind of story, the characters are probably taking time out from their working lives, there will be summer romance and lots of walks along the seaside, in this case in Dartmouth. What's there not to like?
Summer on the River is the story of Evie and her family by marriage: in particular Charlie who reminds Evie so much of her gorgeous late husband, Tommy, and Charlie's difficult wife, Ange, so good with the London wine business but a bit mean. Ange is not keen to share the Merchant's House, which has been in the family for generations, but which Tommy left to Evie in his will, shock horror! Worse still, Evie has let the house to Charlie's cousin and doppelganger, Ben, recently separated and a bit hard up.
Things get interesting when Ben meets Jemima, an attractive letting agent. When Jemima mistakes Charlie for Ben on a later date, sparks fly and there is obvious chemistry between them. It seems as if history repeats, as the scenario is similar to when Tommy met Evie, and they embarked on a long-term, extra-marital affair. What a shame it is Charlie, already married and with his life dictated by the need to run the family business with wife Ange, and not Ben who is a free agent.
Into the mix Willet adds a family secret, which Tommy left Evie to sort out; as well as an unhinged stranger with a vendetta of his own against Evie which goes back to her years as a junior history lecturer. So there is plenty going on for the characters and a carefully orchestrated plot that keeps the reader amused until the last page.
In the background there is Dartmouth, lovingly described, from busy regatta scenes, to tasteful bars and cafes as well as charming gardens. Architecture gets a look-in too, as characters are treated to tours of the Merchant House, Jemima's flat with a view and Evie's renovated boathouse full of light and overlooking the water.
So much to enjoy with the setting, but unfortunately, I rather tired of the characters and all their indecisiveness - to spill the beans or not spill the beans; to begin an affair or not begin an affair - limping through the book chapter after chapter. There was such a lot of infidelity talked about, I was ready to assume Ben and Charlie were more than just cousins, after all why were they constantly mistaken for each other, or had everyone left their specs at home?
Summer on the River made a pleasant break from the more meaty fare and chilling mysteries often on my bedside table. It was nice to be in Dartmouth, a place I've never visited, and Willett lays it all out vividly for the reader. But the dialogue was too saccharine for this reader and the characters too irritating so I probably won't be lured by this kind of cover again. A pity.