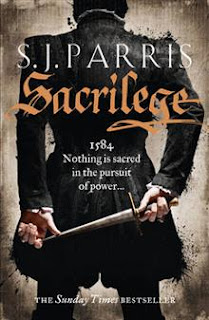 Giordano Bruno was an astronomer, philosopher and mathematician who was burned at the stake for heresy in Rome in 1600. His statue stands on the site of his death in the Campo de' Fiori and he is often seen as a martyr for free thinking and modern scientific ideas.
Bruno is also the main character in a series of mystery novels set in Elizabethan England by S J Parris. Believe it or not, among the other strings to Bruno's bow is a possible stint as one of Sir Francis Walsingham's spies during his time in England where he worked with the French ambassador.
As you can tell Bruno got around. You can read about why he left Italy as a young man in Heresy, the first book in the series. This book starts off with Bruno's escape from a monastery as a young monk, threatened with death because of his heretical reading matter. It is a really exciting beginning, and having read all three books in the series so far, I can say that the excitement never for a moment lets up.
In Sacrilege, Bruno's third outing, he is called upon to help clear the name of Sophia, the daughter of a Cambridge professor who we also met in Heresy. Sophia disgraced her family and was packed off to Canterbury to be wed to a complete nasty by the name of Sir Edward Kingsley, a wealthy landowner over twenty years her senior. When Kinglsey turns up dead near the cathedral with his head stoved in, Sophia becomes suspect number one and flees to London with the help of some friendly Huguenots.
Here she catches up with her old admirer, Bruno. It is midsummer and because of the threat of plague, people are leaving London in droves. Dressed as a boy, Sophia accompanies Bruno to Canterbury, where he is sequestered with another of Walsingham's spies, Doctor Harry Robinson. In spite of being somewhat elderly, Harry keeps an eye on the clerics at the cathedral who, among others, might wish to use the cult of Saint Thomas Beckett, slain around four hundred years before, as a means to reignite Catholicism and a rebellion against the Queen. Included on his watch-list is the chillingly austere Canon Langworth, who instantly seems to be suspicious of Bruno.
Langworth is a powerful man, but that doesn't stop Bruno from doing some serious breaking and entering, thieving of documents and duplicating of keys in his efforts to uncover a sinister plot. The local law enforcers seem to be in Langworth's pay and eagerly snaffle any old vagrant or foreigner for whatever crimes happen around town. In no time Bruno is fingered for at least one of them, which is hardly surprising really. He's such a master snooper and with his head turned by Sophia, he is somewhat hot-headed and vulnerable.
Meanwhile the infernal heat of midsummer drives everyone crazy and Parris's writing is so vivid you can just about smell the body odours of folk living closely together and not blessed with hot and cold running water. The bustling market of the town, the awe-inspiring cathedral and its cavernous crypt are all recreated for the reader but not in such a away as to detract from the action which rattles along towards the requisite surprise ending that we expect from all the best whodunits. It's an altogether brilliant series and I am pleased to note that the next book, Treachery, is due out very soon.