Instructions for a Heatwave by Maggie O'Farrell 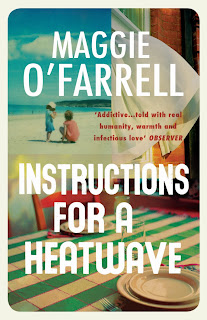 I'd read before of the drought that had Britain in its grip during the summer of 1976 (Anne Berry's The Water Children), but hadn't realised water was so short that the government brought in The Drought Act with fines for water theft and which had Londoners collecting water from a standpipe. This heatwave makes a superb backdrop for tense human activity, and in O'Farrell's novel this is the moment when the Riordan family's past catches up with them.
Recently retired bank manager, Robert Riordan walks out the door of his London house and doesn't return, telling Gretta, his wife of thirty years, he is going to buy a newspaper. A time of crisis like this is a time for a family to pull together, but Gretta's three children each have difficulties of their own.
Michael Francis has problems with his marriage - he had a fling with a fellow teacher and his wife has taken up studies at the Open University, shorn off her hair and scarcely talks to him. When he gets home exhausted from a day at the chalk-face, he finds he often has to take over child-minding and meal preparation, while his wife is studying in the attic or about to rush out the door to meet her fellow classmates.
His sister, Monica, has never wanted children, which caused her previous marriage to end, so you think having a ready-made family with an older husband and his two daughters would be ideal. The trouble is the girls hate her and want their dad to be with their mother again. When the cat gets run over and Monica has to have it put down, the animosity intensifies. But returning to her childhood home to help Gretta, while getting her away from a hostile situation, brings back a lot of baggage Monica has being ignoring for years.
Much of this baggage has to do with her first husband and her younger sister. Aoife was a late baby and a difficult child. At school she suffered from an extreme case of dyslexia, and was labelled stupid. Leaving home as soon as she could, Aoife has landed in New York where she is an unpaid photographer's assistant and has a draft dodging boyfriend named Gabe. She is unable to tell either her boss or Gabe about her problem with reading and this is all about to blow up in her face when Michael Francis phones and tells her to return home.
The three children gather around Gretta, but it takes some time for anyone to have the wherewithal to enact a plan. Gretta has her own demons - her superstitions and her old-fashioned Catholic ideas about how her children should live, leading to numerous disagreements, to say nothing of the issues gnawing at each them regarding their personal lives. And then there's the heat.
Eventually it is what happened in their father's past life that will lead them back to Ireland, the scene of numerous family holidays and a secret that Gretta has been harbouring since her marriage.
O'Farrell is a wonderful storyteller. Each of her characters, in spite of obvious flaws, wins over our sympathy - Monica has taken a brave step to decide not to have children at a time when motherhood was considered the norm for married women. Michael Francis is clearly a good person, or tries to be, often at the expense of his own happiness. And you can only have pity for Aoife, clearly a talented woman bearing the stigma of illiteracy at a time when dyslexia was not understood.
Many readers will recognise the family dynamics, sibling spats and allegiances, the misundestandings and distorted memories, because O'Farrell does this sort of thing so well. She also sensitively portrays the period - when women were still establishing their rights, still learning to 'have it all', when traditional marriages and roles still held sway over people's ambitions. This material could have been leaden and preachy but in O'Farrell's deft hands it is just part of a terrific story with a nicely turned ending. Magic!