An Uncertain Place by Fred Vargas 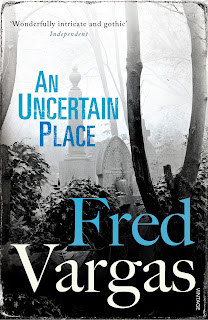 You can tell a lot about a character from how they handle a simple event such as making a journey. Fred Vargas's novel, An Uncertain Place, begins with Commissaire Adamsberg late for a train. He has ironed his shirt for once as he is to attend a conference in London.
While his sidekick, Danglard, paces the platform waiting for his boss, impeccably attired as always, Adamsberg is bailed up by his neighbour, a one-armed Spaniard, demanding help with the birth of a cat's kittens in the garden shed. It's all a bit messy, and makes Adamsberg even later.
On the train, while the Commissaire remains unperturbed, Danglard is unnerved by the train's passage through the Chunnel, resorting to drinking champagne and telling stories - he turns out to be amazingly erudite - while their wide-eyed young sergeant, Estalere, listens with amazement.
The conference gets barely a mention, but a tour of the sights by English policeman, DCI Radstock, turns up a weird mystery outside the entrance to Highgate Cemetery, where someone has deposited a collection of shoes, seventeen altogether, complete with severed feet.
At first this seems an odd digression, for soon the French police are back on their home turf, investigating the particularly brutal murder of a rich and unpleasant elderly man, Pierre Vaudel. His body has been completely reduced to blood, splinters of bone and viscera. Initial investigations point to two suspects: the gardener and odd-job man, Emile, who has a record for GBH, and Vaudel's son, who was for many years disowned by his father.
However, we all know that there must be a more convoluted solution to the mystery, one that will take in the dismembered feet from Highgate. There will be a conspiracy at a very high level of the judiciary system, Adamsberg will make another journey, into eastern Europe this time, to uncover the importance of the name 'Plog', and a rogue young man known as Zerk will intrude on Adamsberg's usual nonchalance in a way he could never have foreseen. Meanwhile, Danglard becomes distracted by the unusual interest he has aroused in a woman he met at the conference and there will be several cats and dogs that are key to the plot.
If that isn't enough to keep the reader entertained, there is Vargas' wonderful dialogue, which makes her characters so interesting and often laugh out loud funny.  Danglard is the Commissaire's go-to man for his encyclopaedic knowledge of history, old cases and who's who in the police force. But other police officers are just as gifted, such as the former Vietnamese colleague who talks in Asian proverbs, often made up, or Veyrenc with his striped hair and habit of breaking into poetry.
Somehow all these attributes become important to Adamsberg and his way of making odd connections to solve a very unusual series of crimes. One can only sit back, enjoy the ride and marvel at the intricate mind that has created the story - and look forward the next Fred Vargas novel, of course.