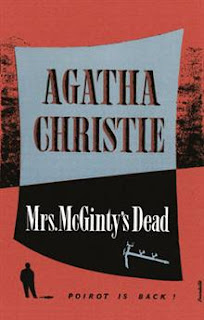 This isn't perhaps one of Agatha Christie's most well-known novels featuring expat-Belgian Hercule Poirot - and after all there were so many - but to me it is well worth a look. It has many features that make it eminently readable.
Poirot is investigating the death of a cleaning woman in the little town of Broadhinney. She has been robbed of a hidden stash of savings and her bedroom thrown into disarray.
Because the town is so small, the only lodgings to be found are at Long Meadows, home of the Summerhayes - a genteel couple recently from India, trying to save their inherited stately home but with scarcely a bean and no understanding of housekeeping. There are dogs bounding in and out of the draughty living-room, the food is terrible and Poirot's mattress sags woefully.
While Poirot shudders with each slam of a door or grimly contemplates his lunch, time ticks on. He is trying to save the life of the convicted murderer - the unappealing James Bentley, Mrs M's lodger, who has no social skills and despondently accepts his fate as he waits in prison for his day of execution. But Superintendent Spence has his doubts and has asked Poirot to intervene so he can retire with a clear conscience.
Rather than hunting for suspects among any old tramp or dodgy passer-by,  Poirot's investigation turns to the more upmarket customers who Mrs M used to clean for. She was a nosy person and seems to have connected one of her clients to a potential scandal. An article in a tawdry Sunday newspaper had caught her eye, which, complete with hazy photographs, asked what had happened to four women involved in murder decades ago.
Poirot is just in the middle of interviewing potential suspects, when who should turn up, but his novelist friend, Ariadne Oliver, biffing him on the head with a carelessly flung apple core. Ariadne is staying with the Upwards - Mrs Upward is an invalid, while her son, Robin, is the playwright adapting one of Ariadne's books for the stage.
Ariadne is hugely uncomfortable with the ebullient young man's arty ideas and would rather go home and hide away with her typewriter and a bag of apples. I always enjoy her outbursts of misery regarding her Finnish detective character, in which some biographers see an echo of Christie's own views on Poirot.
The comedy of both protagonists' accommodation and the good-humoured chaffing between Ariadne and Poirot offer plenty of light relief from the nastiness of murder and the image of a young man on death row. Not that there's ever any doubt that the real criminal will be brought to justice before the hangman begins to ready his noose.
As usual there is a dramatic living room scene in the penultimate chapter where all the suspects wait patiently for Poirot to unmask the real villain. Somehow, in spite of this very familiar narrative structure, Christie throws in enough red herrings and twists of plot to bring plenty of surprises the reader's way before the end.
Posted by Caught Up in a Book at 16:02