The Things We Never Said by Susan Elliot Wright 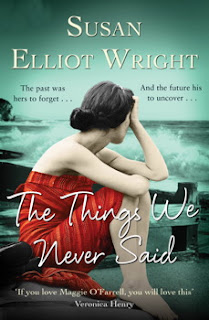 So many novels seem to be written using two alternating perspectives from different periods of time - like this one - and I always wonder if this makes them easier or more difficult to write. It certainly makes for a compelling plotting device.
Susan Elliot Wright's debut novel uses just such a structure - one moment we're with Maggie, who wakes up in a mental asylum not knowing why she's there - the next it's Jonathan whose wife is expecting their first child, and their relationship is at times a little tense.
Maggie's story starts off in 1962, as she begins her career as assistant stage manager with a theatre in Sheffield. Theatre is something she's always wanted to do, though her roots are in Brighton, in the kitchen of a hotel restaurant. Her brother's still there, and her parents are dead, so up in Sheffield, she's definitely on her own. Her digs are cheap and not so cheerful, but the landlady, Dot, has a heart of gold, so things could be worse.
It's a wild and wintry night, when handsome Jack invites Maggie to a party. And so begins the terrible chain of events that lead to her mental breakdown.
Wind the tape forward to the present day, and Jonathan and wife, Fiona, are exited at the prospect of being parents, only sleep deprivation and other little irritations find them snapping at each other and Fiona sleeping in the other room. They're both teachers, and Jonathan's job teaching English at a challenging comprehensive school in London puts him under additional strain.
Furthermore he can't think how to tell his parents about the baby - his father will make snide remarks that will make Jono feel like a failure yet again. Fiona is impatient to tell her friends, but can't while the in-laws remain in the dark.
Suddenly, events take a dramatic turn for Jonathan - his father dies, and a difficult student accuses him of assault. With Maggie, we surface from the mental ward to her slowly recovering memories of the events that put her there. Eventually both stories will collide and the reader can probably guess what is in store. In spite of this, the novel is hugely engaging, the characters vital and their situations at times heart-rending. The support cast of minor characters are fantastic as well - particularly Vanda, Maggie's friend and flatmate who does a performance on stage with a live python.
I found this a brilliant debut novel, that doesn't necessarily tread any uncharted territory, but tells its story with such compassion and a sound sense of the drama that makes a story work. I do hope Susan Elliot Wright has another book up her sleeve - I shall certainly be keen to try it.
Posted by Caught Up in a Book at 00:53