A Pale Horse by Charles Todd 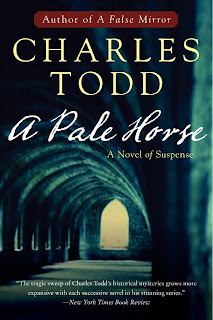 A Pale Horse starts promisingly enough with a body found by a bunch of Yorkshire schoolboys, propped up in the atmospheric setting of a ruined abbey, wrapped in a cloak and wearing a gas mask. As you might remember with the Inspector Rutledge series, we are in the years following the First World War, so gas masks were familiar items and reminders of a terrible human carnage.
The dead man takes a while to be identified, but near the body is a book about alchemy, full of incantations in Latin, a peculiar book to be sure, but inscribed on the flyleaf is the name of the boys' school master, Albert Crowell. Crowell was a conscientious objector during the war, and also a rival with Madsen, the local policeman,  for the affections of Mrs Crowell. She has become disfigured by a scar, the result of a drunk's stumbling onto her path. This gives Madsen a potential victim, for no one has seen the drunk for several weeks, and wouldn't it be nice so stitch Crowell up for the murder.
Meanwhile, Rutledge has been asked to find out what has happened to the oddly named Gaylord Partridge, missing for several months from his home in Uffington, Berkshire. Nestled beneath the hill bearing the ancient giant figure of a white horse, Partridge's house is one of a cluster built originally for lepers, although no such people have ever lived here. Instead they seem to be occupied by lepers of another sort, the kind of people needing to lie low. For instance, Mrs Cathcart is terrified of her ex-husband; Quincey, a remittance man, had promised never to return to England; Mr Allen has consumption and wants somewhere quiet to die.
After foiling Madsen's attempt at sending Crowell down for murder, Rutledge makes a connection between Partridge and a Gerald Parkinson, who abandoned his home and daughters after the death of his wife. A scientist investigating potentially lethal gases to be used in warfare, he was on the watch list of Martin Deloran the War Office. Deloran doesn't want the police digging up facts about the dodgier activities the War Office may have had a hand in, causing some awkward moments for Rutledge's unpleasant boss, Chief Superintendent Bowles.
Rutledge must look into Partridge's past and the reasons for his wife's death and the lingering hatred harboured by his remaining family. His investigations will dredge up the horrors of gas attacks during the war, and of course, lurking in Rutledge's mind is the voice of Hamish McLeod, the fellow officer Rutledge had shot for disobeying an order - the ghost that continues to haunt him.
This is the tenth Inspector Rutledge novel, and it would be nice to see Rutledge moving on from his terrible wartime experiences. Still it is only 1920, but perhaps his acquaintance with Meredith Channing, who has impressive powers of insight, offers some hope.
In many ways this is a book of two halves. The first half concerns the Yorkshire discovery and the Crowells, which is all quite interesting. Rutledge does a clever job of proving Albert Crowell's innocence. But once he's ensconced in Berkshire there seems a lot of to-ing and fro-ing between the cottagers under the white horse, and Partridge's family members nearby and his old stately home. This all got a bit monotonous sadly, and was disappointing after reading some excellent books in this series. Let's hope it's just a temporary blip, and further titles live up to the promise of the earlier books.
Posted by Caught Up in a Book at 11:22