The Opposite of Falling by Jennie Rooney 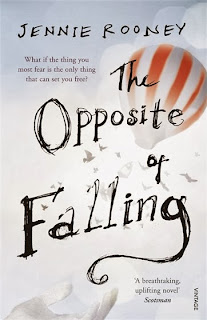 In Jennie Rooney's novel, The Opposite of Falling, flight is a motif that connects three characters. Ursula Bridgewater has, in her early twenties, been jilted by her fiancé, a man with no substance according to Ursula's brother. Her reaction is to travel. It is the 1860s and Thomas Cook is beginning to take tour parties abroad.
Ursula begins quietly with a trip to Wales and is encouraged by the friends she makes to travel again. Restless and unfulfilled when she is at home, travel becomes something to exercise her brain - if only she could stop writing those letters to her ex-fiance, now happily married and a father of two.
Ten years later, Ursula is excited at the idea of another Thomas Cook expedition, this time to the United States, but who should she take with her? Having helped her maid, Mavis, into private enterprise, Ursula decides a sensible replacement would be the ideal travel companion.
Sally Walker has been teaching at the convent which took her in on the death of her mother, but has blotted her copybook with Sister Thomas. She jumps at the chance to work for Ursula, who is kindly and treats her like an intelligent person. Sally is a hopeless shrinking violet, though, for although she has thoughts and desires, she is quite unable to express them.
On the other side of the Atlantic Toby O'Hara grows up with the memory of his daring mother flying  a bat-inspired contraption built by his father - a toy-maker and would-be aviator - a flight that ended in her death. While flying machines are put aside by his dad, Toby as a teenager is drawn to ballooning and other air-born possibilities.
The three characters meet in Niagara, to a background score of rushing water and it is here that they all discover how to take flight in a more metaphorical sense. This may make the novel seem overly contrived, and in a sense it is all about how its characters find what they really want in life and develop the courage to reach for it.
Fortunately the narration of The Opposite of Falling is quirky and charming in an E M Forster kind of way that is very engaging. Rooney uses a detached style of writing about her characters that is slightly old-fashioned, rather than the stream of consciousness, present tense story-telling prevalent in many modern novels. (I enjoy this too as it gives a very immediate feel to a story.)
You have to be really good at your craft to make a traditional style like this work and Rooney never puts a foot wrong. This is a small book, but very polished and poised. I liked it a lot.
Posted by Caught Up in a Book at 14:23