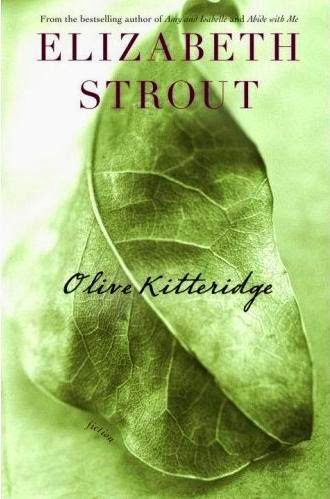 Olive Kitteridge is a kind of novel in short stories. Some of the stories are about Olive or her husband, Henry, while others - quite a few- are about fellow inhabitants of Crosby, Maine where they live, but Olive sneaks into all of them somewhere.
Olive is a retired school teacher, formidably big boned and not afraid to speak her mind. Her husband, Henry, is a pleasant pharmacist who wants people to be happy: his son, Christopher, who suffers from depression, his assistant Denise, who loses her husband. He'd like Olive to be happy too, but the reader learns early on that this is a tall order for Olive.
Olive is a difficult character - she's not easy to like - she can be rude and prickly, often to the people she loves most; Henry has our every sympathy. As a teacher, she was feared by some and remembered fondly by others - either way she is certainly memorable.  She is outlandishly truthful, but also very aware of what is happening around her and the difficulties that people are going through.
In the second story she somehow steps in at the right time to prevent a suicide.  She has a peculiar kind of empathy for the troubled young man who is part of an armed hold-up attempt at the hospital. But does she do enough good to make up for her frequent rudeness?
The stories themselves are rather similar to Olive herself. Some are quite disturbing - there are suicides and several deaths from natural causes; people who have a loved one in prison as well as the armed-hold up story; there are plenty of people, especially women, living unfulfilled lives. But one or two have something approaching a happy ending.
Oddly enough it is Olive herself who makes this collection eminently readable. In spite of the dour themes that run through the book, Olive is a breath of fresh air. Her own problems - her son moving away; Henry's illness, loneliness and regret - are all tackled with that trademark matter-of-fact bluntness of hers, while there's an undercurrent of humour in many of the stories. She can be a bit naughty too - especially with regard to her daughter-in-law, whom she plainly dislikes.
Olive is kind of insensitive but sensitive at the same time and the stories likewise both harsh and sympathetic. It's an accomplished collection, worthy of it's 2009 Pullitzer Prize.