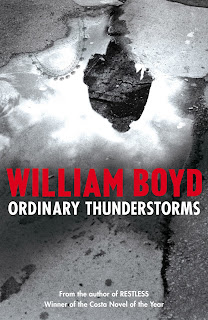 Now this was a difficult book to put down, as right from the beginning it gets is main character, climatologist Adam Kindred, into a growing tangle of murder, conspiracy and the dark undercurrents of London society. Adam is one of those characters that can be tossed about by adverse events because he has just come back from years in America, a broken marriage behind him and the sniff of a new job, a research fellowship at Imperial College, so he has no ties and no one knows he is home.
Eating alone at an Italian restaurant he meets another scientist, an immunologist, also eating alone, who happens to leave behind a folder. Dr Philip Wang's address and phone number are on the documents, so Adam decides to return the file in person, but discovers Wang's dying body and a lurking murderer at his flat. Adam manages to dodge the attacker, but his name has been left with the concierge and his fingerprints are on the murder weapon. He soon realises he has no choice but to go on the run, and hides out, living rough among the undergrowth at Chelsea Embankment.
Adam's a resourceful young man, and sets out to clear his name, and that will mean finding out what it was that Dr Wang had discovered during his trials of a ground-breaking new asthma drug that has someone at the pharmaceutical company Calenture-Deutz determined to suppress.
So begins a convoluted storyline full of odd connections that all tie up cleverly and an assortment of widely varying characters. There's Calenture-Deutz head Ingram Fryzer, full of self-doubt yet determined to maintain control of the company while needing buy-in from another major drug company. He's not a particularly pleasant character, but Boyd somehow makes him to some degree sympathetic to the reader. Not so top nasty Jonjo, the ex-squaddie thug hired to do in Dr Wang who is desperate to track down Adam in order to get his final payout.
Then there is Mhouse, the prostitute that rips Adam off and then later helps him, suggesting he visit the Church of John Christ, if he ever needs a hot meal. Which he does. The Church of John Christ is a marvellous creation, a testament to the novel ways that a new religion can be invented and in spite of its doubtful theological basis, manages to do a lot of good, one way and another.
The story bounces from character to character, and Adam's plight is both nail-biting and enthralling - he's a modern day Richard Hannay - and the chapters just fly by. Boyd manages to come up with a thriller that is also immensely well-written and intelligent. The book's title is a reference to the type of storms that have 'the capacity to transform themselves into multi-cell storms of ever growing complexity', like this rich and complex plot. It is lucky that this particular thunderstorm has storm expert, Adam Kindred, on the case to see a way through the layers of conspiracy, with an ending that is both original and immensely satisfying.