The Green Road by Anne Enright 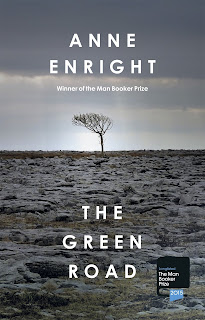 The Green Road is a little gem of a novel, managing to be entertaining as well as crafted, with engaging characters, all of whom belong to the same family: the Madigans from County Clare. They all converge on the family home one Christmas because their mother, Rosaleen, has decided to sell the old house, a decision that throws them into a chaos of emotions.
Before all that happens, though, we are treated to the individual stories of Rosaleen and her four children. Dan upsets his mother at the beginning when he decides to become a priest. Years later he's in New York, living with his old girlfriend from home, while dabbling in the gay scene. Enright's perspective on New York in 1991 and the terrible shadow of AIDS is told through the eyes of Greg, HIV positive and lamenting the friends he has lost. The tone is pitch perfect, vivid and moving.
And suddenly it's Constance, the older daughter, still living near her mother with a family of her own.  Her scattered thoughts as she waits for a mammogram appointment fill in the details of her life and her concerns for her mother and the difficulties around their relationship. For Rosaleen isn't easy. She's deprecating and demanding at the same time - no wonder her children have almost all deserted her.
After Constance, we are swept to Mali where Emmet, Rosaleen's younger son, works with an aid organisation, living with his girlfriend, Alice. He loves Alice but finds it difficult to show this. Emmet has an offhand manner which helps him deal with the horrors of his surroundings, but it doesn't help his relationship. His younger sister, Hanna, an actress in Dublin, is quite the opposite, full of temper and passion - as a child she had a tendency to burst into tears over anything; now as an adult she is inclined to drink.
They are a family of contrasts and they bounce off each other wonderfully when they all come together, bound by the awkwardness of dealing with their mother. Sneaking in is the story of Rosaleen's devotion to her late husband, Pat Madigan, a humble farmer and socially beneath her.
The novel sets the scene for a potent mixture of tense emotions and discord, as well as concern and reconciliation in the family's last Christmas together in the old house. There is a load of humour too - I loved Constance's endless return trips to the supermarket and her outburst when it is revealed that she has forgotten to buy coffee grounds.
It's so very real but magical none the less. This is because of Enright's wonderful writing. I shouldn't be surprised, she's a Booker winner after all and this book was also long-listed and Costa nominee to boot, and deservedly so. Enright could make a grocery list interesting.