Watchers of Time by Charles Todd 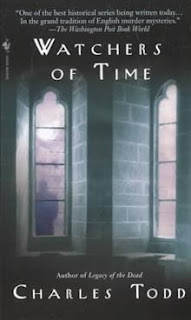 I don't know if it's just me, but it seems amazing how many American authors there are writing period or cosy murder mysteries set in England. With some of them, you're hard pressed to tell they're not English themselves.
One of these is the American mother and son team that writes under the name of Charles Todd. They have a couple of series on the go. The Bess Crawford series follows a plucky young nurse during World War One with connections, through her father, with British Intelligence (spies, that is).
The other series, which I particularly like for a bit of light reading, is the Inspector Rutledge series, set in the years just following World War One. Ian Rutledge is a police officer with Scotland Yard, recently returned from the front. He's youngish and one assumes, fairly attractive, but unable to get close to women because his relationships are marred by the fact that he is always accompanied by the ghost of a fellow officer, a Scot by the name of Hamish McLeod.
This is the officer he had shot for disobeying an order - the kind of order that had men sent 'over the top' into a barrage of machine-gunfire. Rutledge had to fire the 'coup de grace' from his own revolver. So not a happy memory. And now, whether real or imagined, Hamish is always there, lurking in Rutledge's head, passing on his opinions about whatever Rutledge does and the cases he handles.
In spite of all this, Rutledge is an excellent policeman - tenacious and sensitive to the nuances that make different people tick. But Rutledge isn't the only star of the show. The small towns and distinctively British landscapes that feature in his cases are lovingly described in vivid detail.
In Watchers of Time, Rutledge investigates the bludgeoning of a parish priest in a small town near Norfolk called Osterley. This is marsh country with farms and old country inns and big open skies.
The locals are so upset by the death, they cannot believe the murderer is to be found among the townsfolk, so a scapegoat - in this case a dodgy fairground strongman, who was just passing through - is hauled in. He supposedly was after the money taken at the fair - a burglary gone wrong. But the clergy are not so sure, and Scotland Yard is called in to check that they have indeed caught the culprit.
Rutledge soon uncovers more potential motives. Father James happened to hear an unusual confession from an aging coachman on his deathbed. There is the disappearance of the pretty young wife of the local squire's son. There is the erratically eccentric woman who is the only person to admit to hating the priest. And what is the secret of the attractive yet haunted looking holidaymaker, who spends a lot of time in the church?
It is all classic whodunnit stuff, in the great Agatha Christie tradition. Thrown into the mix is a bit of social comment and grim ruminations on the horrors of war. Fortunately these don't interrupt the plot too much and Rutledge gets on with the job of solving the crime, and there's a bit of action at the end that beefs up the pace. Which is how these Rutledge books usually go. You probably wouldn't want to read this sort of thing all the time, but every so often, it's just the ticket.
Posted by Caught Up in a Book at 23:02