Mr Mac and Me by Esther Freud 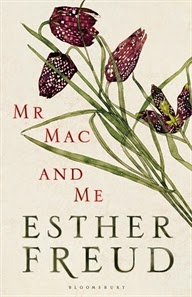 Mr Mac and Me is to my mind the perfect kind of book. Set in 1914, it tells the story of Thomas Maggs, whose father runs a pub in a village on the Suffolk coast. There's not a lot of money to spare and pa tends to drink the profits, while his mother copes as best she can. There are two older sisters, including Ann who helps around the pub, with thirteen-year-old Thomas by far the youngest, though there are six older brothers buried in the churchyard.
Thomas has a club foot, but it doesn't stop him roaming around the countryside, making the journey to school, and being taken on by the local rope-maker as a part-time assistant. It is a dying art, and we are reminded of the changes in store as the nation is drawn into World War One.
Ann tearfully farewells the boy she loves as he joins the navy and we wonder if she will see him again. Everyone expects the war to be over by Christmas, and the effects of the waiting and wondering, the shock of casualty lists on a small village are nicely recounted here. And then there's 'DORA' - the Defence of the Realm Act, which has the locals on the look out for spies, and prosecutes people for showing light after dark or owning binoculars. Thomas takes Dora very seriously.
Into Thomas's world a Scottish artist, Charles Rennie Mackintosh, arrives with his wife and the three of them strike up a friendship. Thomas does odd jobs for them, while Mackintosh's wife, Margaret, feeds him up and the two encourage Thomas's own artistic endeavour. Thomas, who yearns for a life at sea, has been covering the margins of his schoolbooks with delicate drawings of ships.
Mr Mac and Me is very much a coming of age novel and with that there are many dawning realisations for Thomas. There is love too, as Thomas witnesses the pangs of love his sister goes through, and his own over one of the Scottish herring girls who arrive every autumn. And in the background there is the war. Slowly the everyday villager has to come to terms with the horrific casualties, and the sinking of British ships. On a still night you can even hear the guns from over the Channel.
It is an interesting time, perfectly captured in the microcosm of a Suffolk village, and the small world of a young boy. But I was particularly drawn to the story of Charles Rennie Mackintosh, a very real artist and architect who produced exquisite watercolours and designed some of Britain's much loved buildings. Forgotten and ignored in his own time, he is now something of a national treasure. Margaret's work also shines.
Freud has made the pair quirky, charming and kindly, but also passionate, and even stubborn and difficult, as anyone who has to fight for their art can tend to be. The friendship with Thomas brings many of these qualities to life and Thomas as a thirteen year old, struggling to make sense of the world, is the perfect narrator. Mr Mac and Me is Esther Freud at her best and, to me, something of a living treasure.