The Trivia Man by Deborah O'Brien 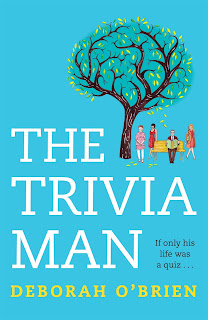 The trivia man of the title is Kevin Dwyer, a one-man quiz team extraordinaire. Kevin has folders full of data that he has been collecting for a large part of his forty-eight years. Initially he hoarded this information (tide tables, weather data, assorted statistics, etc.) for the joy of acquiring knowledge but with the growth of pub quizzes, he has found his perfect pastime. As a bonus trivia gets him out of the house and almost socialising.
At the Clifton Heights Sports Club trivia competition Kevin soon shows his mettle and is instantly head-hunted by several attractive women to give their team a competitive edge. So far he's managed to hold them off, but when he meets school teacher, Maggie Taylor, a reluctant member of Teddie and the Dreamers, he begins to waver.
It doesn't take long to figure out that Kevin is somewhere further along the Asperger's Spectrum continuum than what society classes as 'normal'. He has only one friend - his young nephew Patrick. Eight-year-old Patrick seems to be turning out rather like Kevin, much to the horror of Kevin's sister Elizabeth, who has always regarded her brother as altogether weird.
Like Kevin, Maggie is also single, preferring reading and spending quiet nights in with her dog. She has been coerced into joining a colleague's trivia team for her knowledge of movie history, and because she's an attractive woman in her early fifties who needs to get out more. The karaoke interval that occurs in the middle of each quiz night has Kevin and Maggie hiding out and the two start to get acquainted.
At first this seems like a simple 'rocky path to true love' kind of story. Maggie must first get over her long-term obsession with a previous boyfriend, the glamorous motivational speaker, Josh Houghton, a cad of the first water. And Kevin reluctantly finds himself dating his sister's friend Danni, surely an 'opposites attract' plot twist. Danni is as socially forward as Maggie is retiring, while Kevin's complete inability to dissemble makes him quite the opposite of popular favourite Josh.
However O'Brien is clearly also interested in the issue of what it's like to be different in a society that seeks to have us conform. She avoids using the word Asperger's, just as Maggie avoids reading psychological assessments of 'special needs' students until she gets to know them. It seems that labels confuse and obscure the truth of what people are really like.  For this reason both Maggie and O'Brien get a thumbs-up from me.
The handling of this issue lifts the book above the ordinary. I found The Trivia Man a bright, light read and hard to put down. The humorous episodes at the weekly trivia nights, and especially the quiz questions were a definite plus. I look forward to trying more books from this author.