The Steady Running of the Hour by Justin Go 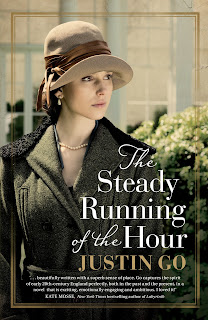 Justin Go's debut is one of those novels that have you hooked on page one.  Tristan Campbell, twenty-three and recently graduated, is at a loose end when he receives a solicitor's letter from London. It informs him that a legacy might be his if he can prove he is descended from one Imogen Soames-Andersson, who hasn't been seen since she disappeared in Europe shortly after the First World War. The will is unusual in that it has allowed a period of eighty years to find a suitable heir.
Tristan takes up the challenge, bringing to the solicitors whatever documentation he has as well as memories of his English grandmother Charlotte, who was never very happy in California. He'd always believed that Charlotte was the daughter of Imogen's sister, Eleanor, but a childless married woman at that time might well have brought up an illegitimate child for her sister, and Tristan sets out to prove it. The only problem is he has a mere two months before the legacy is bequeathed to assorted charities.
Tristan's journey takes him to London, Sweden, Paris and the site of the trenches of Picardy, as well as Berlin and even as far as Iceland. Interspersed with his search is the story of two star-crossed lovers. Imogen is nineteen when she meets Ashley Walsingham, who is about to join his regiment as an officer fighting in the Somme. Imogen is a feisty young woman who doesn't believe in marriage, and follows Fabianism and other revolutionary ideas of the time.
She does believe in love and her passion for Ashley leads her to give him a difficult choice: her or the army.  Ashley loves Imogen as much as she does him, but when he is severely wounded fate interferes and Imogen is lead to believe the worst. The war has an affect on their relationship that it seems can't be healed, though neither will ever forget the other.
Tristan slowly makes odd discoveries, letters that have never been posted and others that have never been read. He finds photographs and Ashley's VC, among other memorabilia, but nothing seems to be quite the evidence he needs. In the meantime he meets a young French woman who makes him stop and think about the whole enterprise while upsetting his emotional equilibrium. There is an echo here of Ashley and Imogen while Tristan's headstrong and impetuous behaviour mark him out as a likely descendent.
The Steady Running of the Hour is a beautifully wrought story full of anguish and self-realisation. While the reader knows a lot of what has happened, just as Tristan does, right at the beginning, there are still plenty of revelations. Tristan's journey is one of discovery in more ways than one, and the story is both compelling and original. I can't remember when I read a more affecting story of love and loss - perhaps The English Patient? - and this novel will linger in my mind for some time to come.