An Expert in Murder by Nicola Upson 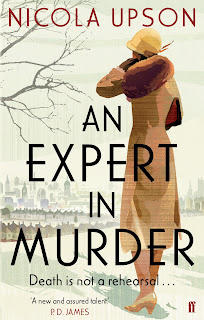 Josephine Tey was the pen-name of mystery writer Elizabeth Mackintosh whose book, The Daughter of Time, was voted the greatest crime novel of all time by the Crime Writers' Association in 1990. An Expert in Murder is the first of Nicola Upson's mysteries that feature Josephine Tey and her friend Detective Inspector Archie Penrose. The two make a nifty crime-solving duo in Upson's traditional, Agatha Christie-style series of whodunits set in the 1930s.
An Expert in Murder features Tey in her other role, as a dramatist whose play, Richard of Bordeaux, is the huge box-office hit of its day. It begins with a train journey in which Tey finds herself seated opposite an attractive by shy young woman wearing a stunningly smart hat. Eighteen-year-old Elspeth is on her way to London with a consignment of hats from her mother's millinery business and soon Josephine is giving out her autograph and sharing a meal with her young fan in the dining car.
Elspeth is planning to meet her boyfriend, Hedley White, who is a back-stage hand at The New, the theatre where Josephine's play is nearing the end of its run. Hedley has tickets for the show and is planning a romantic evening, but murder interferes and Elspeth is discovered in the compartment stabbed and dramatically arranged in a tableau featuring two commemorative dolls from the play.
You can't help wondering if Josephine was the intended victim, but soon Archie Penrose in on the scene and numerous suspects and motives start turning up. When a second murder occurs it seems likely that there is a connection between the two victims and the actors and production team are thrown into the spotlight. The cast of suspects includes the director/lead actor of the play, John Terry, who has a secret to hide about his personal life. Is would-be playwright, Esme McCracken bitter enough to kill and could actor Lewis Fleming also have a motive being so desperate for money? Then there is Elspeth's beau who soon does a runner.
And what of the mysteries that surround Elspeth herself? As the much loved but adopted daughter of the not very theatrical Simmons, there is the question of her birth and unsurprisingly a back story which extends back to events in the First World War.
Costume designers Ronnie and Lettice give Josephine a place to stay in London and are full of lively quips and cheeky gossip. They are a good foil for when Josephine is brooding over a recent legal battle with the writer Elliott Vintner who accused her of plagiarism. When he lost the case he committed suicide, an event Josephine still feels guilty about, despite Archie's protestations that none of it was her fault.
There are plenty of red herrings and possible scenarios for the reader to mull over, but for me this was something of a murder by numbers plot, with no real surprises. What made the book really enjoyable though was Upson's ability to recreate the London theatre scene circa 1934. Taking place in a chilly March, the story has plenty of atmosphere and with its colourful yet sympathetic characters made for a diverting read.  Basing the story on real-life people was a definite plus, too, and I shall be happy to see what Tey and Penrose get up to next.