Bring Up the Bodies by Hilary Mantel 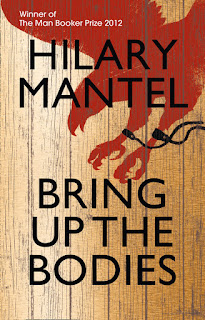 I'd been putting off reading Hilary Mantel's hugely successful, double-award winning book, Bring Up the Bodies, even though Wolf Hall had been one of my favourite, most recommended books for the year it was published. Possibly this was because I'd been saving it for a quiet spell, so I could give it the attention it deserves.
But mostly I think it was because with the first book I'd become oddly fond of Thomas Cromwell, unlikely as it seems, and having learned about Tudor history over the years, I know a bit about what happens. This is always the problem with historical novels about famous people - there's no chance of a surprise ending.
Bring Up the Bodies focuses on just a few months among the people of the court of Henry VIII when he was tiring of his marriage to Anne Boleyn and her inability to produce a son, and when he had become besotted with Jane Seymour. As usual Henry turns to Thomas Cromwell to fix things for him so he can get his way.
Actually Henry sounds somewhat nicer than that in the book, while it is Anne who comes out as haughty and waspish, attributes that make her hugely unpopular at court, especially with her ladies in waiting. Her flirting with the men of court, including her brother, and the potential for infidelity, real or imagined, lead as we know to her downfall.
The all-knowing, all-seeing Cromwell, tasked by the king to find a way out of the marriage, easily finds people willing to dob the queen in - although much of this doesn't take place until the second half of the book. Earlier chapters focus on the characters and politics within court and Cromwell's household, the personalities and how they interrelate as well as Henry's growing interest in Jane.
For this reason Bodies doesn't have the pace of Wolf Hall, which covered huge changes in the order of things in England - the Reformation, the royal divorce, the deaths of major figures such as Thomas More and Thomas Wolsey. While it may take longer to get going, the tension and unease that build page by page become excruciatingly intense.
As Cromwell puts his considerable talents towards getting witness statements to prove Anne Boleyn's treason, he appears as a menacing figure with a veneer of reasonableness. He knows it would be dangerous to disappoint the king and to the modern reader a lot of what he does is extremely discomforting.
Bring Up the Bodies is immensely absorbing none the less. Mantel is a wonderful storyteller, and her style makes these characters from the past very real and believable. Her use of the present tense and very natural, modern language make it easy to read, while the characters are still allowed to be witty and comment interestingly on what is happening.
It is easy to see why Mantel is now so well thought of among the novelists of our time. She has pulled off something quite remarkable, making the distant past come alive, but somehow with Bring Up the Bodies, I didn't feel quite as impressed as with the first book. It will be interesting to see how she goes with the third - I envisage something pretty special.