House of the Hanged by Mark Mills 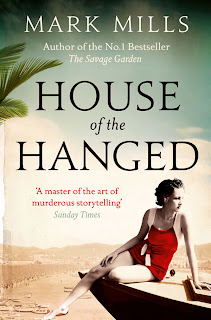 Mark Mills' novel House of the Hanged starts off at a fair clip. We are flung into 1919 Petrograd, where a Cheka patrol awaits our young hero, Tom, who is desperately trying to escape Bolshevik Russia with the woman he loves. Things all go horribly wrong, and the young Englishman barely escapes with his life.

Next chapter, sixteen years later, we're in the south of France and Tom is collecting his delightful goddaughter Lucy from the station. She's visiting during her summer break from university - her parents have a holiday home near Tom's and it is all cocktails on the terrace, and tennis parties with the neighbours who are all expats or well-heeled emigres. We're between the wars, though, and there's the machinations of Hitler plus the the threat of communism looming in the background.

Tom has had a fairly intense career with the British secret services, but now he writes travel books. It seems a charmed life until he wakes up in the middle of the night to discover someone breaking into his bedroom intent on killing him. The assassin seems to know his way about the house too. But Tom's secret agent reflexes are still as good as ever, and all that tennis, boating and swimming mean he's in good shape, fortunately, as it soon becomes a fight to the death.
Like the reader, Tom has no doubt that this attempt on his life has something to do with his past, and whoever wants him dead is likely to try again. Tom begins to suspect the involvement of people he has come to know at the seaside town of Le Rayol: there's Lucy's father, Leonard, a longtime friend and bigwig with the Foreign Office. Or could it be Yevgeny the art dealer and his wife Fanya, or even their charming American guest artist, Walter? Tom is looking over his shoulder at every turn.
But as he's unable to tell anyone, the house parties, the games of volleyball on the beach continue, as do Tom's problems with women: the beautiful Helene, who sees other men, or Lucy, who seems to have developed a huge crush on Tom.
Mills does a great job of recreating the summer atmosphere of the south of France and the idle past-times of the idle rich who live there. This gives the book the colour that makes it interesting - with descriptions of delectable meals and lively characters, in between the bouts of thrilling action. House of the Hanged is a bit like those films they used to make in the fifties and sixties, with gorgeous Riviera settings, glamorous blondes in evening gowns and car chases involving men in tuxedoes. I can almost see a young Audrey Hepburn as Lucy.
But the book is lot better than that. The interactions between Tom and the other characters, especially with Lucy and Barnaby, his impecunious old school friend, together with the past events that have shaped him, give the book an extra dimension, and the writing is crisp and nicely judged. It is pure escapism on the whole, however, but charming and satisfying escapism for all that.
Posted by Caught Up in a Book at 00:01