A Possible Life by Sebastian Faulks 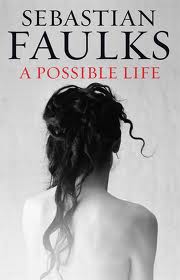 Sebastian Faulks' latest novel, A Possible Life, reads like a series of longish stories linked by a number of themes. He evokes a great range of places and periods, and the people who inhabit them, in such a way that brings them all dramatically to life. You get so immersed in one story, only to be plunged effortlessly into the next person's world - that is truly terrific fiction writing.
I loved reading about Geoffrey Talbot, who isn't quite smart enough for the Diplomatic Service, but with his talent on the cricket pitch, becomes a promising school master teaching French at a prep school. Then World War 2 comes along, and he finds himself doing some 'hush-hush' work in France before being captured and shipped off to a  concentration camp. The effect of this on his life is dramatic and shown with immense sensitivity.
Then it's Victorian London and seven-year-old Billy is sent off to the workhouse because his family can't afford to feed him. But Billy is tough - he has to be - and it is in the workhouse that he meets Alice. Billy has an entrepreneurial talent and when he gets out into the world again he becomes a self-made man, eventually deciding to marry. Who else but Alice? In the background, however is Alice's sister.
The third story is set in Italy some time in the future. Elena is the daughter of a boat-builder. She's clever and so enthralled by the natural world around her she has no time for friends, until her father brings home an orphan boy, Bruno, to live with them. They are chalk and cheese - she's analytical and precise; he's sensitive and creative. They become inseparable, but when Elena's father dies Bruno must leave to make a life for himself. Elena's work in the subject of neuroscience, particularly human consciousness, is a potential key to the connections running through the book.
Jeanne is a servant in rural France around the time of Napoleon. She's not very bright which frustrates the family she works for, even learning to read a little is quite beyond her. Slowly the story of her early life comes out - the orphanage, the struggle to make ends meet and the monk who attempts to befriend her.
The final story is about Jack, a 1970s rock musician who's had some success and is thinking about his next band, when he meets Anya. She's an intense young singer-songwriter with an amazing talent and destined for stardom. They are drawn to each other and Jack puts his own work on hold to help Anya get started.
Faulks manages to suit his style of writing to each of the stories so that they each have a distinctive voice, fleshing them out with the details that make them interesting. But there's a lot more going on than that. There are some profound ideas here - missed opportunities, the lingering effects of trauma, love and separation, memory, the price you pay for giftedness - deftly woven through the stories which are also linked by other connections and coincidences.
I came away feeling that there is much happening beneath the surface and that this is the kind of book to read again and dip into another layer.