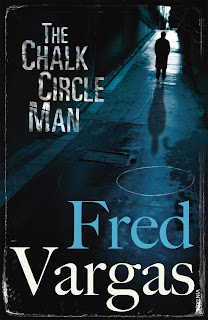 A new series of murder mysteries set in Paris seems too good to be true. I remember fondly curling up with my parents' Maigret books, enthralled not only in the human drama that unfolded but at the glimpse of French life that Simenon described. Especially French cafes. Could Tripe a la mode de Caen be quite the delicacy it was cracked up to be, or was it made all the more delicious because of the large calvados Maigret drank as an aperitif?
Fred Vargas' detective, Commissaire Jean-Baptiste Adamsberg, also spends a bit of time in Parisian cafes, and meals are implied, but he seems to be more interested in people watching and turning over thoughts about a case, or about his lost love, his petite cherie. He's not what you might expect in a man of his rank. He's slight and scruffy, with the look of a peasant, and disappears for long periods of time from his office, leaving his detectives to carry on, mystified as to his whereabouts.
These are not high-tech investigations either. I'm not sure Adamsberg even carries a cell-phone. He doodles while he interviews witnesses and while he does talk to pathologists and even a handwriting expert, SOCO teams don't get the attention they do in many police procedurals. Ah, how refreshing!
In The Chalk Circle Man, Paris is talking about the curious chalk circles that appear overnight around its streets, each circle containing some article of urban flotsam, varying from a watch strap to a dead cat. Adamsberg, who has a a kind of sixth sense for detecting cruelty, anticipates something sinister behind it all and before long a body turns up in the next circle - a harmless middle-aged woman with her throat cut. It is up to Adamsberg's team, including clever but depressed Inspector Danglard, to figure out who is drawing the circles, and whether or not it is the same person responsible for the murder.
Helping with the case is Mathilde, an attractive marine biologist, who follows people she takes an interest in. Adamsberg helps her to find a blind man to whom she wants to rent a flat, and in return she tells Adamsberg about the chalk circle man.  This might sound slightly ridiculous, but somehow the whimsical style of writing manages to make it all work. As time passes there are more circles and then more bodies. Is the chalk circle man a crazed psycho-killer, or is there another motive behind the killings?
Vargas' novel is filled with dialogue which gives it the lively, philosophizing tone that you might expect in a conversation over a delightful Paris lunch and several glasses of wine. The characters are quirky or intelligent or both, and all have plenty to say, slowly revealing their personalities. In this respect, The Chalk Circle Man reminds me a little of the books of Alexander McCall Smith, but with more bodies. The story meanders from character to character, and from circle to circle, and just as I was thinking that it was more about the journey, which is hugely entertaining, than the destination, Vargas manages to throw in a wonderful surprise ending. Fantastique!