How It All Began by Penelope Lively 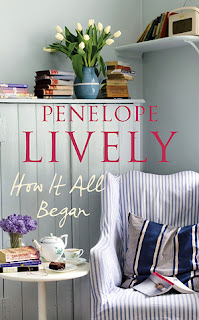 It is always a treat to come back to a familiar author like Penelope Lively. I read How It All Began almost non-stop, which may seem surprising because it isn't full of gripping action or other page-turning devices, but for some reason I couldn't put it down.
The novel's storyline hinges on how one incident, in this case the mugging of an elderly lady called Charlotte, has a domino effect on the lives of several other people.
Charlotte is left with a broken hip, which means her daughter, Rose, has to take time off work to care for her. Rose's employer is Henry, a retired historian, and while she is away, Henry must ask his niece, Marion, to accompany him to Manchester where he is to deliver a speech. Not being the efficient Rose, and being quite busy with her interior design business, Marion neglects to bring Henry's notes, so he has to cobble together a speech on the train. At the lunch beforehand, Marion meets an important business contact, but Henry's speech makes him appear a doddering fool. His subsequent humiliation fires his efforts to restore his credibility in some surprising ways.
Because she's in Manchester, Marion leaves a text to her feckless lover, Jeremy, which unfortunately is intercepted by his wife. And because Charlotte is laid up, she is unable to teach her weekly English class to new migrants. She suggests she could teach someone at Rose's house, if that's convenient, and the course director suggests Anton, an event that profoundly disturbs Rose.
Into the quietly predictable lives of these characters there is suddenly a fair amount of turmoil. For some, there will be radical changes before the end of the book. For others things will settle back to how they were, but not before altering the characters' lives in ways they would never expect.
Charlotte, quietly trying to fill her day so that she can be distracted from pain, has time to think. A retired English teacher she has her memories: her wonderful marriage to Tom, motherhood and her career, and most importantly books. There is some nice stuff about what reading means to her and the importance of stories. Stories are the key to unlocking the part of the brain that teaches Anton to read.
Anton's discovery of reading and literature creates some interesting dialogue with Charlotte. Even Rose, whose conversation with her husband doesn't go much beyond 'pass the salt',  discovers things with fresh eyes and opens up.
The overall theme of 'no man is an island' runs through the book, but while some characters meet new people who change their lives, it is striking how often they are unable to talk to those nearest to them. How It All Began is a shortish novel, but none the less it is definitely one to get you thinking.