A Treacherous Likeness by Lynn Shepherd 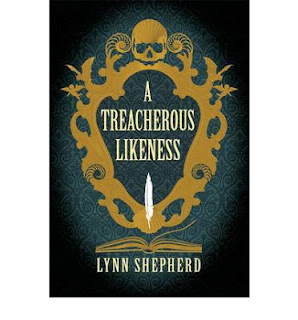 You could say that poets were the rock stars of the 1800s, and when you look at Percy Bysshe Shelley,
his wife Mary (author of Frankenstein) and their friend Lord Byron you can certainly see the similarities. Even though Shelley didn't achieve fame and fortune in his lifetime, the rock-star behaviour was certainly there - the drugs, the women and a tragically early death just for starters.
Lynn Shepherd weaves Shelley's story into a new case for her detective hero Charles Maddox, whom we met in Tom-All-Alone's, a wonderful book that I reviewed earlier this year. A Treacherous Likeness begins some thirty odd years after the poet's death, when Sir Percy Shelley, his son, leaves a calling card at Charles's house in London, a small event that has a big impact. Charles's uncle has a stroke that leaves him partially paralysed and unable to talk. Uncle Maddox has had dealings with the Shelleys before and it is his early case that becomes the crucial mystery which young Charles must investigate.
Sir Percy and his wife have worked hard to keep the Shelley flame burning, and this includes the kind of damage control that saw any unauthorised biographies nipped in the bud, and incriminating papers destroyed. They ask Charles to negotiate with a particular party who has certain documents for sale that might show the poet in a poor light.
Charles manages to inveigle his way into the home of the person in question only to discover that she is none other than Claire Claremont, Mary Shelley's hated step-sister and one-time lover of Byron. The four were together in Italy at the point when Frankenstein was written and events took place that changed their lives for ever. But it soon becomes apparant that the documents Sir Percy and Lady Shelley are really worried about are closer to home, that is, the case notes made by Uncle Maddox, which Charles soon discovers have disappeared.
As Charles searches for the missing pages, and talks to his uncle's old assistant, George Fraser, little by little, the facts come out that explain much of what happened to the poet and his circle, as well as to Uncle Maddox.
The story includes the suicide of two young women that Shelley was connected with, the sadly early mortality of several of Shelley's young children - were these deaths natural or was there mischief afoot? There is the question of Shelley's mental state, his sudden mood swings, his violent dreams and moments of terror. Was this to blame for the tragic events that dogged the poet for most of his life or was it the menage a trois of Shelley, Mary and Claire, which fuelled such jealousy that left the sisters no longer on speaking terms?
In many ways the book is not the mystery novel that one might have expected following the first Charles Maddox adventure - there isn't an obvious murder, and Charles isn't chasing criminals and dodging danger. This is more an historical novel that aims to describe the life of two famous literary figures, but that doesn't mean it lacks an exciting plot.
Lynn Shepherd has certainly done a massive amount of research and the novel that has eventuated is as intriguing as any murder mystery and the sad events that touch the lives of both detectives make it all the more poignant. You may wonder if the author has taken a huge liberty in the kinds of things she suggests may have happened. The notes at the back of the book however do give a good degree of insight on the writing of the book and argue a strong case for Shepherd's theories. One can only wonder what she has in store for Charles Maddox next.
Posted by Caught Up in a Book at 01:01