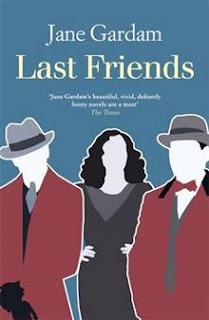 Last Friends is Jane Gardam's final novel in the trilogy concerning Edward 'Filth' Feathers, his wife Betty and Filth's rival, enemy and eventual friend, Terry Veneering. This one fills in a lot of gaps about the life of the mysterious Veneering, born in a slum in a Teesside coastal town that is grubby with coal and with few opportunities for someone with such brilliant potential.
His story begins when his mother, the fierce and passionate Florrie, falls for a circus acrobat from Odessa. When Anton Venetski badly damages his back during an aerial stunt gone wrong, Florrie takes over and moves him into her parents' home. When it is obvious there's a baby on the way, marriage is inevitable, but the reader can't help but wonder at this odd couple. Anton turns out to be as intellectual as he once was agile, but as a chronic invalid who can he share his ideas with? Possibly the parish priest, who sends young Terry out for whiskey.
Terry likewise is an outsider - he spends a lot of time wandering the black stained beach or hanging around in the band rotunda, dreaming of a life at sea or just thinking. Between the efforts of his headmaster, Mr Smith (one of Sir's masters if you remember from Old Filth), Mr Parable, the town's peculiar lawyer and the even more weirdly named, Mr Fondle, Terry manages to escape. There are some dramatic near misses with World War II looming large as life, and Terry seems to be flung about more by fate than by determination. But in the end, as we know from the earlier books, he makes his name in construction law in Hong Kong, married to the breathtakingly beautiful Elsie.
In Last Friends, we find out how he got there, and it also links up all the other little stories and characters that happen along the way. Gardam sets this up from the start by having us meet the remaining 'last friends' when they turn up for Filth's memorial service. It can take quite an effort to keep track of them all, particularly when a lot of the remembering is done from the point of view of Dulcie, widow of a another legal heavyweight, Judge William Willy.
Dulcie is quite hopelessly silly and rushes off on odd impulses much to the distress of her daughter and neighbours. When Dulcie finds herself putting up perpetual houseguest and scrounger, Fred Fiscal-Smith, the two end up trapped together in the village church, where it is so cold they are in danger of hypothermia. Later she has an urge to visit Fred in his crumbling northern manor (he turns out to be Mr Smith's son), where she enjoys the wonderful hospitality of the Judges Hotel, a refuge that has saved one or two elderly characters from the grips of pneumonia. Which is just as well as their efforts at memory and stabs at understanding each other and events of the past are hugely entertaining.
The way the characters' connect and how the narrative weaves their lives together is a bit like a very elaborate folk dance. Somehow all this happens with writing that seems surprisingly effortlessness, with the most priceless dialogue that only Gardam can do. And in spite of the advanced years of the remaining characters, the ending offers some interesting future possibilities. All in all, I guess Jane Gardam won't be coming off my favourites list anytime soon.
Posted by Caught Up in a Book at 01:15