The Necropolis Railway by Andrew Martin 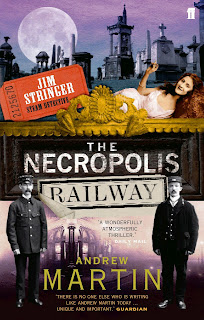 I still find it difficult to believe how much I enjoyed The Necropolis Railway by Andrew Martin, because at the outset there were one or two difficulties that as a reader I had to get my head around. To begin with there was all the steam locomotive jargon, a field of knowledge I know nothing about; then there was the cast of scarily rough and grubby rail workers, and on top of that a swag of early nineteenth century slang. The setting is a wintry Waterloo Station in 1903 - a bleaker spot it is hard to imagine - everything seems drenched in rain and soot, dirt and squalor - what could there possibly be to enjoy?
For a start there is the wonderful character of Jim Stringer, a nineteen year old eager to make real his dream of one day being an engine driver. He's down from a charming coastal town up north where his father would love him to take on the family butchery business, only Jim is smitten by the railway bug, and manages to get a referral from a visiting railway bigwig, Rowland Smith.
Jim's to start off as a cleaner (of engines) before eventually progressing to the role of fireman, the step before driving a train. But Jim makes the mistake of mentioning his sponsor, hoping to impress his fellow workers. They treat him like a pariah, and he nearly tosses the job in after a couple of weeks. Even the house he rooms in is a miserable hole, with a leaking roof, truckle bed and no cocoa. If it weren't for the gorgeous, though offhand, landlady he'd certainly be looking for new digs.
There's a question-mark over the mysterious disappearance of Jim's predecessor, Henry Taylor, which looks more and more suspicious when Jim himself experiences a few close shaves. Then there are the goings on connected with the mysterious graveyard route, its financial woes and Rowland Smith's cost-cutting. Smith sends Jim a peculiar letter asking him for any information on possible misconduct among the rail workers. Andrew Martin layers mystery upon mystery.
Turn of the century London, the huge station of Waterloo, it's immense sheds full of steam engine paraphernalia; the back stories of rising socialism and the unions, of women beginning to control their own destinies all combine to make an atmospheric setting that draws you in.
And then there are the terrific minor characters: the mercurial Vincent, who is eager for promotion and his grim, train-driver Uncle Arthur, and Arthur's fellow driver, the frequently drunk Barney Rose. There's Mike, who's face seems to be all teeth and chubby, jovial Mack from the graveyard line who can afford a surprisingly lavish lifestyle.
These characters and Jim's lovely landlady are given a working-class London vernacular which enlivens the dialogue immensely without recourse to weird spellings. And Jim himself is a vigorous young chap, always beavering away to solve the riddles of the graveyard line. He's a man of action and you can be sure he'll be along for another adventure in the next Andrew Martin book. If it's anything like this one it will be a ripper!