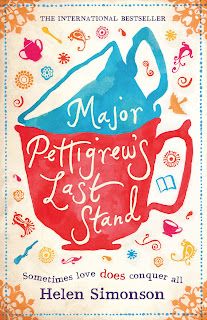 In her acknowledgments at the back of the book author Helen Simonson passes on her thanks to the writer that first taught her 'to appreciate the beauty of the sentence'.  One of the things I particularly liked about Major Pettigrew's Last Stand is that Simonson writes such beautiful sentences which not only capture the tone of Major Pettigrew so well, but have a rhythmical cadence that shows you an author who cares about her craft. These sentences are also imbued with a lovely wry humour, and one reason it works so well is because of the pitch and rhythm of the syntax. This is something I first discovered in P G Wodehouse when I was a girl, and possibly even Jane Austen, and have rediscovered in other masters of comedy from Kingsley Amis to Bill Bryson.
Actually Jane Austen is the first author I thought of as I read this book, because it is a novel about the trials of true love especially in the context of the expectations of society. Major Pettigrew is a widower of sixty-eight, when his younger brother dies suddenly. He is so upset by the news that he answers the door in a floral housecoat that belonged to his late wife, to find himself almost collapsing on the tiny shoulder of of Mrs Ali from the village shop.
So begins a friendship, and maybe it took such a moment of weakness for it to blossom because Pettigrew is such a traditional, stiff-upper-lip army type that he would never have thought of openly courting the attractive Pakistani widow who sells him delicious loose tea and other comestibles. In spite of their different cultures they find they share a joy in reading and both have a similarly ironic sense of humour.
But we all know that the course of true love is never easy and both the major and Mrs Ali have problems to deal with first. For the major, there is the issue of the Churchills, a pair of beautifully hand-crafted hunting rifles that were given to his father by a grateful maharaja in India just after the Partition. The major's father left one rifle to each of the boys, on the proviso that they be reunited upon the death of either one of them, and then handed on together to the next generation.
But the Churchills are of course worth a lot of money and Bertie's wife, Marjorie, as well as the major's son, Roger, would like some extra cash. The major loves his Churchill and the thought of collecting its pair has been one consolation at his brother's death. How will he stand up to Marjorie and Roger, with whom he has an awkward relationship at the best of times?
Meanwhile, since the death of her husband, Mrs Ali has been slowly handing over the reins of her shop to her scowling nephew, Abdul Wahid. He's a devout Muslim who has been trying to reconcile his soul with the disgrace he has thrust upon his family, some years ago. Mrs Ali is keen to smooth over the difficult waters that prevent his happiness. While the major wants his family to uphold tradition, Mrs Ali wants to encourage her various relatives to break a few rules so that people can live and let live.
These niggling difficulties are complicated by the coming events of a dance at the golf club, a shooting party hosted by the local lord of the manor, and the arrival of a wealthy American businessman. The usual village characters are all there too: the vague vicar and his busy-body wife, the blushing spinster, the golf club cronies of the major. If there's one fault in this book it is that these characters are so classic that they verge on cliche.
Luckily the story hums along towards a magnificent climax, where we get to see the major in the action he has trained for, with some lovely touches of irony, of course.