A Humble Companion by Laurie Graham 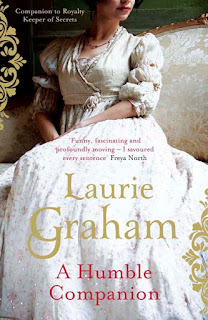 I could so very easily add Laurie Graham to my list of favourite authors - she so rarely disappoints. Her latest novel, A Humble Companion, describes the lifelong friendship between Princess Sofy, one of the younger children in George III's large family, and Nellie Welche, the daughter of an enterprising baker and steward to the royals. It is King George himself who notices that little Sofy could do with a friend from the outside world, which is very perceptive of him considering he is the king who ends up completely off his rocker, sadly.
Nellie is twelve when this arrangement is made, and while she is still able to carry on normal life with her family, she is from time to time requested to spend a few weeks with Sofy, sometimes in their royal house in London, and at others at watering holes on the south coast. The story is told completely from Nellie's point of view and  she makes intelligent comments on what she sees within the walls of the royal apartments, accommodation which is surprisingly lacking in luxury.
As the years pass, Sofy and her sisters continually miss opportunities for mixing with other suitable young men; often fantasising about attractive equerries, cocooned as they are by their mother, Queen Charlotte. Somehow politics, war and the prejudices of their parents seem to intrude.
Meanwhile their brothers make all kinds of unsanctioned alliances and secret marriages, the eldest of them, the future Prince Regent, famously with Mrs Fitzherbert. While Prinny fritters away a fortune on parties and fripperies, Nellie grows up and, in spite of a disfiguring birthmark, makes a sensible marriage, helps in the family business and becomes a published author.
We are treated to a sensitive portrayal of what it is to be a woman 'in trade' at this time. In the background however, huge change is erupting over the Channel, with the French Revolution and the execution of Louis XVI and Marie Antoinette. Napolean sweeps in and there is war, so the English princes rush off to join their regiments. While these events unnerve the Royalties, as Nellie calls them, the world of the princesses remains pitifully small. Surprisingly, Sofy manages to disgrace herself to such an extent that marriage becomes out of the question.
Laurie Graham does a magnificent job of capturing the events of the time from her characters' eyes, and offering what seems a very audacious theory for Sofy's fall - although a quick trawl through the Internet reveals that this view does indeed hold water. Nellie is sparky and wry which gives the writing plenty of colour, as well as insight. The frequently tragic events are tempered with more humorous moments making A Humble Companion one of the most readable historical novels ever. I completely devoured it and have been quite at a loss since I finished the last chapter.
Posted by Caught Up in a Book at 01:14