Sidney Chambers and the Perils of the Night by James Runcie 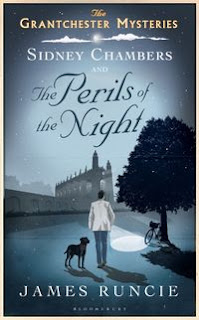 I wish more mystery writers would package their fiction in bundles of short stories like this - it makes such a nice change as they are ideal for picking up and putting down again. You can read a story a night, or leave the book for a week or two if you are busy.
Sidney Chambers and the Perils of the Night is the second instalment in James Runcie's Grantchester ecclesiastical whodunit series. Set in the 1950s and beyond, it features Sidney, a priest, or Canon actually, in his thirties with a living at Cambridge, where he also teaches the odd divinity class. This means he gets to mingle with the dons and students as well as the members of his parish.     Maybe it's his naturally curious personality, or it could be his sharp intelligence, or perhaps it is being friends with policeman and backgammon buddy, Geordie Keating, but sooner or later Sidney becomes embroiled in crime.
In this collection, Sidney takes a funeral for a Cambridge don who falls from a rooftop during a daring climbing escapade. It is one of those 'did he fall, or was he pushed' sorts of stories with a brilliant twist at the end. Just so you don't think it's murder all the way, the next story concerns the suspected arson of a barn rented by a down-at-heel photographer.  Hildegarde, a German widow Sidney has been quietly courting, comes to visit in the next story but gets caught up in the murder investigation of a maths professor found dead in his bath. Could defective wiring be at fault?
There's a story about a poisoned cricketer, the first Pakistani to bowl a hat-trick for the Grantchester side - which includes a wonderful piece of cricket commentary, when Sidney is asked to umpire. Sidney's other love interest, the glamorous socialite Amanda, announces she is engaged to a scientist at work on cutting-edge theories about the universe. Sidney soon suspects he might not be all he's cracked up to be but how to tell Amanda? The final story throws Sidney into a serious situation with the Stasi in East Germany, when a visit to Hildegarde goes pear-shaped. How will this impact on Sidney's relationship with the woman he wants to marry?
Among the usual characters are Sidney's Dovstoevsky reading curate, Leonard, and the housekeeper, Mrs Maguire, who rules the roost and has Sidney careful not to offend, because in spite of her sharp tongue and a tendency to rearrange his papers, she's a pretty good cook.
While they might not be edge of the seat reading, the stories are very warmly humorous, with lots of interesting digressions into subjects like maths, physics, music and of course, cricket. This work-out for the brain makes the stories even more satisfying, and with the atmospheric setting of Cambridge in the 1950s, the Grantchester Mysteries are hard to resist.