A Stairway to Paradise by Madeleine St John 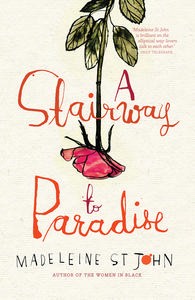 Reading one of Madeleine St John's London novels is rather like watching a play. It must be all that dialogue and those interior scenes - the dining rooms, sitting rooms and kitchens. This one, being about desire (as the front cover blurb points out), has a few bedroom scenes as well.
A Stairway to Paradise describes the secret love between two characters: Alex who is married to Claire, with two children, and Barbara, Claire's friend from yoga, who comes to help out with the children from time to time. Barbara is much younger and a bit of a drifter, choosing to live in bedsits or in flats provided by her employers where she does child minding and housework.
Barbara is a godsend, though - she cooks well and even manages to tame the most difficult children. She is also quite gorgeous with her golden skin and lustrous hair. For someone so gifted, Barbara is strangely lacking in confidence or the drive to make important decisions about what she wants in life and how to get it.
There has already been some history between Alex and Barbara when we first meet them, driving home from a party with Andrew, Alex's newly divorced friend who is back from the States. The car scene, another interior, is full of tension, but that doesn't stop the chaps from thinking about Barbara afterwards. Andrew finally gets up the nerve to ask her out, and the two make a connection. He is obviously more suitable for Barbara, suggesting she fulfil her dreams of maybe training as a teacher, and travelling to India.
Alex is less appealing. He's aware of his inclination to behave badly to both Claire and Barbara, but for all that manages somehow to show some restraint. Perhaps he's afraid of the tellings-off he's inclined to garner from the women in his life. I did find myself wondering about the attraction Alex has for Barbara. Her travel companion, Gideon, seems so much more likeable than two men who have already been around the block.
Yet it is Alex who disturbs Barbara's peace of mind, and this is what causes the tension that drives the plot. The book describes the awkwardness, guilt and dubious morality of clandestine affairs. And it asks how sensible is it to delay separation until the children are older when a marriage is obviously failing.
Again, St John can be relied upon to capture the essence of her characters so that they portray the idiocy of  middle class obsessions and anxieties, with enough humour to make the story sparkle. This is the last book that she wrote before her death in 2006 - all four of her novels were published between 1993 and 1999 - which makes me wonder what else she might have produced given a bit more time. At least the reader has the pleasure of knowing that these are the kind of books that can be read again and again.