A Treacherous Paradise by Henning Mankell 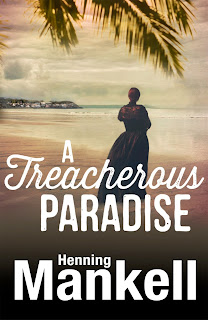 Henning Mankell writes two kinds of novel: dark and moody detective novels, usually featuring troubled Swedish policeman, Kurt Wallander, or stories set in Africa. I've read quite a few of the Wallander books, which are never anything short of terrific, but A Troubled Paradise is the first I've read of Mankell's Africa books.
As a historical novel this seems a new departure for this author. It is set over a hundred years ago in Mozambique, at that time a colony of Portugal.  But there is at the heart of the book, a kind of mystery, which is based on a little known fact that Mankell came across: that a Swedish woman was for a brief period the owner of a flourishing brothel in the port of Lourenco Marques -  now Maputo. Where she came from and what she did after that, no one seems to know.
Mankell teases this out into the story of Hanna Renstrom, a teenage girl from an impoverished rural family in the north of Sweden,  sent by her mother to the city to make her own way in life. After a stint as a maid, Hanna is given the opportunity to work on a steamship as cook. Soon after, she is married to the third mate, only to be widowed a short time later when her husband dies of an unknown fever off the coast of Africa.
Unable to contain her grief, Hanna decides to stay at the port where her husband is buried at sea, escaping her ship by night and making her way to what appears to be a hotel. Hanna suffers an illness here herself, is cared for by the exotic looking female staff and only realises a few days later that the hotel is really a brothel. As the weeks pass, Hanna feels unable to leave, the decision to return to Sweden is too difficult to make, but no obvious alternatives appear either.
Fortunately Hanna has some money, a widow's pension given her by the shipping company, so no immediate departure is necessary. This gives Mankell the opportunity to describe through Hanna's eyes the environment created by the white Portuguese colonists, where blacks far outnumber the whites who have all the power and use harsh measures to maintain control.
There is an intense discomfort in this relationship, and Hanna is appalled at the treatment of blacks by their bosses, their lack of rights and the brutal punishments that meet the merest of misdemeanours. But making friends with the black prostitutes and other native staff also creates distrust and uncertainty. Many of her efforts to help backfire, and she is shocked to find she reacts violently when one of the prostitutes drops a tray.
Mankell creates some wonderful characters: the unpleasantly evil nurse, Ana Dolores; the lovely and worldly prostitute, Felicia, who becomes as close to Hanna as any of the girls; the wise yet volatile brothel owner, Senhor Vas; the crocodile farming, guard-dog breeder, Senhor Pimenta, who makes a fortune out of people's fear. Even Vas's pet chimpanzee, Carlos, has loads of personality, and Hanna recognises in herself his same the sense of displacement.
Over the course of the novel, Hanna has to grow up. She has come from an incredibly sheltered background, but learns to read and speak Portuguese, to run a business, to figure out who she can trust and who she cannot. She gains enough confidence to champion the cause of a black woman who murders her white husband, and this doesn't earn Hanna any favours.
There is certainly much to think about here, but the extraordinary setting, the engaging character of Hanna and the events that happen to her provide a very absorbing story. There is as much pace in the book as any of Mankell's gripping detective novels, with the bonus of taking you to a very different place and time, albeit a grim and tragic one.