In Her Shadow by Louise Douglas 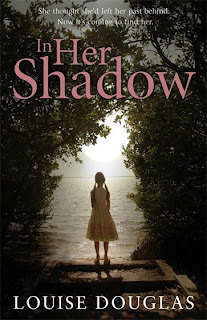 I don't often read books like this one, but every so often they're just the thing. They're not quite 'chick lit', more like 'chick suspense' and you know once you've started on page one, you're going to be hard pressed to stop reading until you get to 'THE END'. The good ones anyway. And In Her Shadow is pretty good.
Hannah Brown works at a museum in Bristol and is retrieving an item from a display cabinet when she sees Ellen, her childhood friend. She turns and flees in shock, almost passing out, because Ellen has been dead for twenty years. Is Hannah being haunted?
While Hannah goes through the motions of normal life, her work and her concerns for John, her colleague who is married to flagrantly unfaithful Charlotte, the past comes back to disturb her. Little by little the reader is put in the picture of what happened all those years ago.
Hannah is a young girl when she and her friend Jago dare each other to enter the grounds of Thornfield House, the home of a reclusive old lady that all the kids in their Cornish town revile as a witch. This is the first Hannah hears about Ellen, Mrs Withiel's granddaughter, the girl who will become her best friend.
Mrs W dies, and the house is eventually taken over by her invalid daughter, Anne Brecht, her dashing German husband and Ellen, just slightly younger than Hannah. The family welcome a new friend for Ellen, who can be temperamental. The Brechts are everything Hannah's family are not - elegant and cultured as if they stepped out of a magazine. But they are troubled by sadness too - Anne is dying, and Mr Brecht disturbed and controlling. No wonder Ellen gets uppity. Once a famous concert pianist, Anne can no longer play, and Ellen is expected to play for her for hours on end.
Jago meanwhile is abandoned by his family and ends up living with the Browns - he was always like a brother to Hannah, but as they reach their teenage years, the three become an awkward trio when Ellen takes a fancy to Jago. It is two's company, three's a crowd for poor Hannah, but because Mr Brecht doesn't like Ellen seeing Jago, Hannah is thrown into the role of go-between. It's a bit like Romeo and Juliet, and the reader knows something terrible is going to happen, an event about which Hannah continues to carry a huge burden of guilt.
The story of the past is cleverly woven into Hannah's present - where events lead her back to Germany to discover the truth of what has destroyed her relationship with Jago and her peace of mind. The short chapters and careful building of suspense make for gripping reading, though the denouement was for me a little forced and unlikely.
Hannah is a very sympathetic character however and the reader is lulled into hoping for a happy ending. There's plenty of lovely descriptions of Cornwall and hazy summer days. Perhaps there is a little of Daphne du Maurier with the melodrama of a tainted family set against a coastal Cornish background. And while it was purely pleasurable and relaxing, I would be unlikely to reread a book like this - Rebecca on the other hand, is another story.