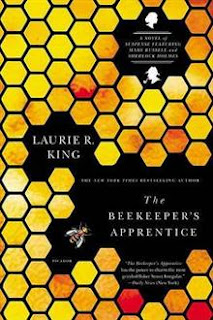 It seems we just can't get enough of Sherlock Holmes. Along with countless movies and TV series, there are plenty of literary reinventions of the great detective - among these are the Mary Russell books by Laurie R King. There are twelve titles in the series, so I thought I'd start off with the first one, which explains how Russell is introduced to the great Holmes, now retired and in his fifties, slowly mouldering away in the country, writing tomes on various forensic topics and keeping bees.
That is until fifteen-year-old Russell almost trips over him while ambling across a field in Sussex, reading a book, dressed as a boy with her long yellow plaits tucked up in her cap. Russell lives at the adjacent farm with her aunt - she inherited the farm from her mother, her parents are dead along with her little brother and, like Holmes, she is damaged. The sharp-tongued dialogue that passes between the two quickly reveals to each of them that they have met their intellectual match, and they repair, engrossed in conversation, to Holmes's house for tea prepared by Mrs Hudson.
Over the following years, Holmes becomes Russell's mentor, while Russell's intellectual banter breathes life into the old boy and Dr Watson and Mrs H couldn't be happier. Pretty soon some cases come along. There's the case of the Barkers, oddly enough they keep a huge menagerie of dogs, but it is the recurrent illness of Mr Barker that has his wife seeking help. Russell takes the lead on the next case, the theft of a cash box and several hams from a village pub, which is quickly wrapped up and helps her prove her worth.
The case of a kidnapped senator's daughter, stolen from their encampment during a rustic tour of Wales, is much more sinister and indicates the work of an evil criminal gang. There can be no room for error in this one or a young girl will be killed. Holmes and Russell enter the scene of the crime heavily disguised as gypsies complete with horse and caravan.
It looks like the book will be a series of stories each dealing with a particular crime, but after this Russell heads back to Oxford, where she is studying theology and chemistry. Suddenly her life seems to be under threat, her college rooms have been broken into, and Holmes has saved her from a bomb going off. He too has had a near miss, which has left him with lacerations on his back, and the two must go into hiding.
This last case takes up the remaining half of the book, as the two play an elaborate and time-consuming hoax in order to bring the master criminal out of his lair. It is all cleverly done, but somehow I felt the change in pace meant the plot seemed to wallow. There is a lengthy stretch where Holmes and Russell visit Palestine, for no obvious reason other than to give the criminal the slip and attend to some business for Holme's brother Mycroft, which is not explained.
Fortunately the pace picks up again towards the end, there's an exciting showdown and the scene is set no doubt for the next book in the Holmes and Russell series.
King has done a very good job of recreating the style of the original Holmes and Watson books by Conan Doyle, for a modern audience. However sometimes she tries just a bit too hard and there are clunky usages. Perhaps this is because Russell is the narrator and as such, an occasional pedantic tone comes through from her character. Like Holmes, she can be very irritating. For this reason and the uneven pace of the plot I feel I am in no hurry to read the rest of the series - a pity.
Posted by Caught Up in a Book at 16:11