Mouse and the Cossacks by Paul Wilson 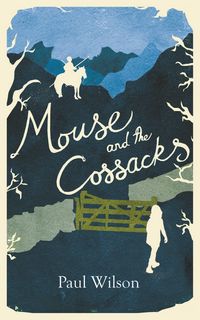 Mouse and the Cossacks begins with a young girl and her mother moving into a remote farmhouse on the outskirts of Manchester. There is a sense that they are escaping, and one can only guess at the traumatic experience that has brought them here, because the first thing we find out about young Mouse, is that she cannot speak.
Little by little we learn about another escape and the ensuing car accident which killed Mouse's high-achieving brother, Max. Although this isn't the reason that Mouse is unable to talk, that started some years before, the grief that surrounds the family make her likelihood of recovery even more unlikely.
While her mother promises to think about a return to work and a new school for Mouse, the two remain at home, Mouse learning to cook and garden in an effort at routine and regular meals. She's a fighter, taking on her mother's grief as well as her own and the terrible guilt they both struggle with.
When Mouse discovers a cache of unposted letters and memorabilia belonging to William Crosby, the owner of their house, another story emerges. William was an army officer at the end of World War Two, tasked with managing the influx into Austria of Cossack refugees. He falls in love with Anna, their interpreter, and is optimistic that in the reorganisation of Europe there will be for the Cossacks a permanent home. Churchill has promised to look after them, hasn't he, and William hopes to build his future around Anna.
As history tells us, Churchill was tied by promises to Stalin at Yalta, and the Cossacks were forced to return to the USSR, facing execution or labour camps. Either way, many of them died. William, caught up in the middle of these events as a young man, has to do things he will always feel guilty about, while losing his one real chance at happiness. The resulting guilt and bitterness dominate the rest of his life.
While things don't look too good for William, now dying in hospital, things must surely get better for Mouse, who puts so much energy into trying to fix things. She emails William's family to find out what to do about the letters; she sends text messages to her friend Lucas, inventing elaborate reasons why he cannot visit their house. Although she is sent to 'speech therapy', help comes from a different quarter, when she whimsically texts a random number, and unexpectedly receives a reply from a sympathetic voice telling her about a 'forgiveness machine'.
Paul Wilson carefully treads a path around his themes of guilt, forgiveness and redemption to create a thoughtful novel with richly observed characters and a sad reminder about the plight of the Cossacks. Mouse as narrator is a wonderfully engaging character, as children dealing with issues way beyond their years can sometimes be. I enjoyed the book immensely and will be placing this writer on my watch list.