Secrets of the Sea House by Elisabeth Gifford 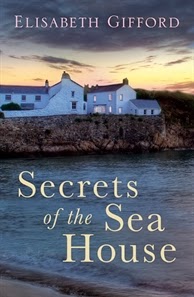 Initially I wasn't sure how much I'd like Secrets of the Sea House. The main character, Ruth, has an awkward personality - she's inclined to lose her temper and has panic attacks. And then there's the mermaid theme that runs through the book, which could so easily have dragged the novel into the realm of fanciful nonsense.
Mermaids first crop up when Ruth and her husband, Michael, move into the Sea House, a rambling old manse on the remote Scottish island of Harris. They are renovating the house to turn it into a B & B. While replacing some floorboards, builders discover the tiny body of a newborn baby, born with a mermaid-like tail appendage instead of legs. The body is over a hundred years old.
Fortunately Ruth has a degree in zoology - she does drawings for academic publications - and knows just who to ask about this strange phenomenon, and receives a logical, scientific explanation. This was when I breathed a sigh of relief and really began to enjoy the book.
When Ruth discovers she is pregnant, she and Michael are excited, but under pressure to finish the renovations before the end of the tourist season. Luckily Michael's brother, Jamie, and his new partner come to stay and chip in. But Ruth flips when she senses a ghostly presences in the house, and still has lingering bitterness about her own past. She has had a terrible childhood, her mother having drowned in a London canal, leaving her to be brought up in a care home. Is is possible that she will ever be a good parent?
In the background are a host of charming island characters, particularly their neighbour, Angus John, who brings them milk every morning in a whiskey bottle. Meanwhile Ruth is determined to find out more about Reverend Alexander Ferguson, the minister who lived at The Sea House in the mid 1800s.
The Harris parish was Alexander's first as a young minister in his mid-twenties and he has left good friends in Edinburgh and a trail of broken hearts. For Alexander has astonishing good looks, with his black hair and sharp cheek bones, descended as his grandmother would have it, from the Selkies, or seal people.
Alexander is fascinated with Darwin's ideas of evolving species, and the old stories about mermaids, together with some fairly recent sightings, have made him obsessed with a theory to link humans with aquatic species, such as seals. With his ascetic habits and head full of notions, it comes as a jolt when Alexander has to take heed of his parishioners - particularly when he stumbles across Moira, a young girl with no home and ill from living rough.
Moira's family has been victims of the clearances and the nasty Lord Marstone. Like other landowners turning to sheep farming, he has seen countless crofters packed off to Canada, or forced to eke out an existence on rocky or mashy land. Many died. Things get complicated when Lord Marstone's pretty daughter, Katriona, turns up at the manse wanting lessons in Gaelic.
The novel weaves together the narratives of Ruth, Alexander and Moira, to create an absorbing story that delves into the past with threads describing the science of the day, and age-old folklore. The characters with their particular foibles, are well rounded and interesting, each learning some difficult truths and being all the better for it. In the end, I couldn't put the book down, and the bibliography hints at some interesting further reading on the clearances and legends of the sea folk.