The Gallery of Vanished Husbands by Natasha Solomons 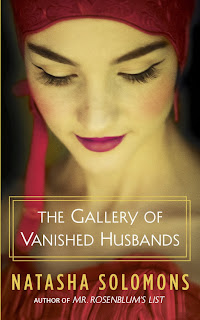 This is one of those charming books, rather like Mr Pettigrew's Last Stand, which turn up every so often and make you ask: why aren't there more books like this?
The Gallery of Vanished Husbands really only concerns one husband; in this case it is Juliet Montague's.  George is an emigre from Hungary, who turns up just after the war to work at a London optometrist's where he gives Juliet an eye test. Juliet at seventeen is a good Jewish daughter, and being somewhat bored working at her father's optical lens making factory, is ready for the next great adventure - marriage.
Unfortunately, George turns out to be a gambler, and when their youngest is no more than a baby, he disappears for good, taking with him for reasons known only to himself, a painted portrait of Juliet as a child. Juliet is left with two children to raise alone, and the title of a deserted wife, aguna, making her something of an embarrassment - a woman who cannot keep a husband.
The story begins with Juliet visiting London on her thirtieth birthday, money in her purse for a much needed refrigerator. Passing artists displaying their work in Bayswater, she finds herself talking to Charlie, offering suggestions, for although she has no talent as an artist, Juliet has a critic's eye. Instead of the refrigerator, she commissions Charlie to paint a new portrait of herself.
So begins a friendship and business partnership, and Juliet, eventually giving up her job at her father's factory, is thrust into the heady London art world of the 1960s. Earning the concern and disapproval of her parents and their Jewish neighbourhood,  Juliet becomes owner of Wednesday Art Gallery, where she is immersed in the bohemian world of Charlie and his young artist friends.
It is through Charlie that she meets Max, once a war artist whose grim experiences have left him something of a recluse, living in a cottage in the Dorset countryside, painting birds. Juliet sells his work, because it gives her that 'tingle', in spite of it being more figurative than contemporary. She can never persuade Max to appear at exhibition openings at the gallery and eventually takes her children to Dorset one summer holiday in order to meet him.
The novel weaves the slow development of their relationship, with Juliet's eventual determination to track down her husband to ask for a divorce, taking her surprisingly to California. While her relationships are the cornerstones of the plot, each chapter features a new portrait of Juliet. Another thread is the difficulty of fitting into a traditional culture and being a good mother while developing a career. The legacy of the war and the Jewish Holocaust are shadows from the past, while the crazy 1960s create daunting new challenges for its characters as well.
This is a wonderful book with a different view of the time, and has an engaging heroine in Juliet, who seems at first such an ordinary girl, but who manages to lead an extraordinary life. If you are interested in art, the book offers a wonderful glimpse of how a picture comes together, and if you are not, you may be tempted to give art another go to see what gives you that 'tingle'.
Posted by Caught Up in a Book at 14:05