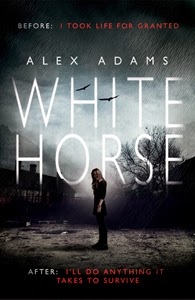 I don't often read dystopian novels - they can be a bit grim - but they are often compelling. White Horse ticks both those boxes for sure. Set over two time periods, beginning eighteen months apart, the story chronicles events following the spread of a terrible virus. Its flu-like symptoms can kill very quickly, or alternatively they can alter human form, turning people into monsters.
The story is narrated from the point of view of Zoe. Before the virus she's mentally fragile, unable to get her act together since the death of her husband several years before. She works as a janitor at a pharmaceutical laboratory in New York, mopping floors and cleaning out the cages of the lab mice. It is obvious there's some weird stuff  happening here. Those injections her boss, the remote George P Pope, gives her - are they really just flu shots?
Things take a turn for the worse when a mysterious urn appears in Zoe's living room. Her handsome new therapist, Dr Rose, tells her to open the urn, but Zoe hesitates, imagining some kind of Pandora's box episode. After all, is it a coincidence that soon after the urn's arrival, people in her apartment block began to get sick?
The storyline flips constantly between this first period (DATE: THEN) and those labelled DATE: NOW where Zoe is making a difficult journey by bicycle, through Italy, heading for Greece. All around her the world is a post-apocalyptic nightmare. There is very little fresh food, and towns and cities, where supplies still can be found, are beset with dangers - survivors willing to kill for any fresh meat.
At times feeling ill herself, Zoe is aware that she might be succumbing to the virus, but still offers to rescue an English girl, Lisa, who is also frequently sick. As if things couldn't get any worse, they collect another fellow traveller, a nasty piece of work who is only ever named as the Swiss. He has an agenda that is only slowly revealed, and which can only mean harm to Zoe.
The backwards and forwards plotting feeds out just enough information to allow the reader to gradually fill in the gaps, as well as making you eager to read the next chapter. The doom-laden storyline makes you fearful for Zoe, and it takes a lot of restraint not to flip to the back to check that she will be OK. As I said this is a very compelling story, a little reminiscent of Justin Cronin's Passage trilogy. As it turns out White Horse is also the first book of a trilogy but, feeling exhausted from the harrowing events of the first book, I am happy to take a breather before the next book appears.