A Little Murder by Suzette A Hill 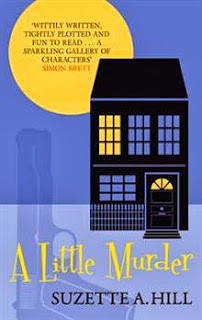 If Barbara Pym had decided to write a murder mystery, it might have turned out a bit like A Little Murder, with its drolly amusing characters and persistent digs at ‘polite’ society. The murder in question concerns the death of aging social butterfly and high-class good time girl, Marcia Beasley, found shot dead in her home, naked with a coal scuttle rammed on her head.
Marcia’s sensible niece, Rosy Gilchrist, is horrified of course – not that the two were ever close as attested by Auntie’s will, which left everything to a home for donkeys. The story takes place eight years after World War II, and Marcia’s wartime history soon rears its head. Perhaps not surprisingly Marcia used her glamorous looks in an undercover role, under the bed covers that is, worming secrets out of the enemy.
At first you might be forgiven for thinking that Rosy is going to do a bit of sleuthing to get to the bottom of things. A dinner with Marcia’s ex-husband, and a visit from a fellow wartime spy, calling himself Richard Whittington, bring to Rosy’s attention Marcia’s surprising wartime career. But while she may have been an affective spy, Marcia was also known to be reckless.
Whittington reveals that Marcia fell for one of her pillow talkers, sabotaging an op behind enemy lines. Could this be the reason for her murder, or was it a need to suppress potentially dangerous secrets? Rosy, well aware of the latent scandal in her aunt’s past, would like the whole sorry episode to evaporate. But Whittington and another chum from the war years, dachshund-toting, cigar-smoking Vera, are sure Marcia must have left an incriminating document in Rosy’s care – if only anyone knew where to find it.
The novel is more comedy of manners than edge of the seat whodunit with a cast of farcical characters, including fastidious Felix, florist to royalty and his supercilious special friend, Cedric. There are the vapid Saunders who throw wonderful parties, and Marica’s dreary neighbours the Gills, who bore everyone with fundraising whist drives. Hill throws in just enough murders to keep you turning the pages, and while the pace might have been improved with a little less of the Felix and Cedric banter, the wittily stylish prose and 1950s London setting add plenty of entertainment.
Posted by Caught Up in a Book at 15:28