A Patchwork Planet by Anne Tyler 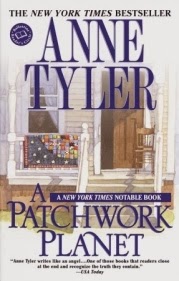 A Patchwork Planet is the first novel I discovered by Anne Tyler and I enjoyed it so much that I have devoured everything of hers I've come across ever since. As in many of her books, it features a main character who is a little on the edges of society, in this case, family black sheep, Barnaby Gaitlin.
Barnaby has a failed marriage behind him and before that a stint at a reform school, having been caught breaking into other people's houses. Unlike his mates who looked for money or alcoholic consumables, Barnaby would sit in people's living rooms and go through photograph albums or pocket small ornaments.
Being a Gaitlin, there was money to pay off the victims of his crimes but the years following his early misdemeanours have done nothing to earn back the respect of his well-to-do family. He lives in a bedsit, sees his daughter only once a month and works as a manual labourer for Rent-a-back, a company that does odd jobs for the elderly and lonely.
But maybe it is just that Barnaby hasn't met his 'angel' yet. All the Gaitlin males have encountered an 'angel' who has put them on the right track towards prosperity. Grandfather Gaitlin's angel told him that what women wanted was a model of themselves which they could dress in the outfit that they were to wear that day. The Twin-form launched what was to become the business that made his fortune.
But Barnaby doesn't seem all that bothered about what his family hope for him. As we know he is insatiably curious about people - he follows a woman at the train station who agrees to deliver a package for a stranger. He becomes so obsessed with her that he strikes up a relationship with her, particularly after she somehow helps him when his ex-wife decides he shouldn't see his daughter Opal any more. Could this Sophia be Barnaby's angel?
As we wait to find out, we see how much of an angel Barnaby is himself. His long list of clients can be demanding, calling the agency at all hours to clear the snow from driveways, collect groceries or put up Christmas trees to impress visiting grandchildren.
Tyler spins a terrific yarn about a man trying his best to be a good person yet is held back by his obligations to family and his tendency to disappoint. Her characterisation is nothing short of brilliant - Tyler has a talent for quirky old people and Barnaby, who narrates the story, is a warmly entertaining companion. There is plenty of humour too - Tyler has that knack of being able to write a feel good novel that is also poignant and has a lot to say about family expectations and how society regards success. This isn't the first Anne Tyler novel I have been happy to revisit, and I am sure it won't be the last.
Posted by Caught Up in a Book at 23:31