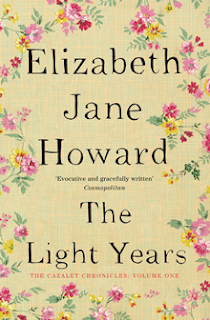 I was rather pleasantly surprised to discover that Elizabeth Jane Howard had written a fifth book in the Cazalet series. With All Change just coming out, I decided to revisit the earlier books, thinking I'll just give The Light Years a quick glance through before getting stuck into the new book. However no sooner had I opened The Light Years up on page one than I was completely immersed in the lives of an English extended family over two summers just before World War Two. I just had to read on.
The Cazalets are a family of three brothers: Hugh and Edward, who came through World War One, and their younger brother Rupert, who was too young to enlist. Their parents, the Brig and the Duchy, live at Home Place, a rambling country house in Sussex. The Cazalets' wealth is based on the timber industry with Hugh and Edward working for the family firm. Rupert has avoided joining them because he aims to make painting his living and teaches art to support his family.
There is a huge cast of characters, helpfully outlined in a family tree at the start of the book, plus a list of the relatives and servants that make up the different family households. It's a bit like a Tolstoy novel really, with the story jumping from person to person and war looming in the background. While some big things do happen - there's infidelity, children planning to run away from home, unrequited love and unexpected pregnancies - it is the little dramas that make the story interesting and also explain such a lot about what life was like at the time.
The children are particularly interesting, often left out of the loop when adults discuss a possible war, yet they are amazingly perceptive and entertaining. The older children - particularly Polly, Louise and Christopher have to deal with some pretty big issues. Polly, Hugh's daughter, becomes particularly worried about the likelihood of war but can't share her fears; Edward's daughter Louise wants desperately to be an actress and feels uncomfortable around her father; Christopher, her cousin has had a terrible time at his school, vows to run away and should there come a war will be a conscientious objector.
The young children, self-important Neville and outspoken Lydia add some hilarious dialogue. The servants also get a look in with a budding romance between the widowed cook, Mrs Cripps, and Tonbridge, the unhappily married chauffeur. And the governess (the girls aren't sent to school!), Miss Milliment, is a terrific creation - in spite of her plain looks and her ancient and often grubby clothing, she has such a fund of erudite knowledge that she soon commands respect from those she converses with.
The Light Years leaves the reader at the point of Chamberlain having reached a peace agreement with Hitler and everyone breathing a huge sigh of relief that a fragile peace seems likely to continue. It sets the scene perfectly for the next book, Marking Time, and the inevitable announcement that Britain is at war with Germany.
Posted by Caught Up in a Book at 19:08