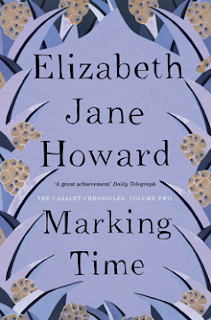 Once you've started with the Cazalets, it is hard to stop. I found myself following on from The Light Years with the second book in the series, Marking Time. This is definitely much darker than the first, beginning as it does with the start of the Second World War.
At first war has little effect on the family - Hugh must carry on helping run the family business, particularly now the Brig is going blind. Edward is too old for active service but does his bit at an airfield, giving him irregular hours and limited leave - a perfect cover for his continued affair with Diana. Rupert enlists with the Navy and this seems a safe corner in the war effort until Dunkirk, where he is listed as missing.
Clary is the only one of the family who dares to believe her father is alive while her step-mother, Zoe, has to cope with bringing her daughter into the world alone. With the blitz getting into full swing in London, the various family groupings decide Home Place is the best location to hunker down and wait out the war.
Most of the novel is told from the points of view of the three daughters: Louise, Polly and Clary who are growing up. Polly has to come to terms with her mother's possibly fatal illness, an illness she is not supposed to know about. Clary continues to hope against hope, but has matured enough to befriend Zoe and help out with baby Juliet.
Louise wins a place at a drama school and her parents allow her a year to make real her dream of acting, otherwise she is doomed to a sensible office job. She experiences miserable digs that are a stark contract to the comfortable life she leads at home - the young actors are half starved and have no heating throughout the winter.
Louise is probably one of the more interesting characters in the book as she is determined to experience life and avails herself of every opportunity. Even her friends are interesting, particularly Stella, who comes from a family of artistic and intellectual London Jews.  Louise meets a much older man she is attracted to, the portrait painter Michael Hadleigh, but to contemplate marriage at her age will surely put an end to her theatrical aspirations.
For many characters though, Marking Time is just that, a book about waiting. Like the first book, it has some very funny moments with the younger Cazalets amid the more poignant ones: Rachel's growing love for her friend Sid, Sybil's illness and the arrival of Archie, Rupert's art school friend. Closing with the Japanese bombing of Pearl Harbour, the series is set for cranking up the tension as the war grinds into its more decisive phases.
Howard is a master at recreating the period through her intimately-portrayed characters and realistic dialogue. Each character has their own version of the war, their own private anguishes, but brought together they treat the reader to a very detailed picture of what the war was like for civilians in England at the time.