All Change by Elizabeth Jane Howard 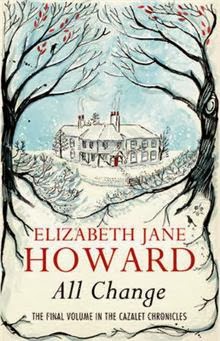 It would be easy to imagine a sequel to All Change, Elizabeth Jane Howard’s surprise additional book in the Cazalet series. The author has left her characters with such a lot of work to do. And it isn’t really surprising when you think about the time. Set in 1956, there have been a lot of social and economic developments since the war, which had provided such a rich assortment of events in the lives of the family for the first four books.
One of the most obvious developments is that the Cazalets do not lead the lives of privilege that they used to. Although not in the league of the Downton Abbey lot, they still had houses in London as well as in the country, loads of servants and sent their sons (though not their daughters) away to boarding school.
The younger Cazalets don't have such luxuries – Rupert has managed to scrape together enough money for a house he adores, but it is too expensive to heat, Zoe does the cooking and the children attend the local school. Clary and Archie scrape a meagre income from Archie’s painting and teaching, and live with their children in a humble two bedroom flat. Polly has married a lord, but the baronial pile is falling to bits - luckily the sale of a few of their Turners has helped to make one wing habitable.
Louise, now divorced and renting an unpleasant London flat with her old pal, Stella, works for a living as a model. She has nice clothes and is fed well by her married lover, but she never sees her son and her life seems devoid of purpose.
The older Cazalets are struggling too. Home Place where Rachel lives needs expensive repairs, and of the original help there are now only the Tonbridges (cook and chauffeur) and housemaid Eileen. Edward has married his long-term lover, Diana, but this has not made them happy – they live beyond their means, drink too much and have constant spats, while former wife, Villy, bitter and unfulfilled, lives with Miss Milliment who is slowly succumbing to dementia.
Hugh is blissfully happy with his new wife, Jemima, and their precocious daughter, Laura – her hilarious outbursts are reminiscent of the dialogue between Neville and Lydia that lightened the drama in the previous books. But Hugh’s health is fragile and as chairman of the family timber business, he hasn’t moved with the times. Soon everyone’s livelihood looks more and more precarious.
The story is set for change, and how the Cazalets adapt to post-war Britain is what drives the plot. As usual, Howard manages her huge cast with care – there is still plenty of character development, and while many characters are not particularly likeable this seems to make them interesting. Clary was always a bit prickly and her relationship with Archie is rocked by perceived infidelity, but this somehow helps her as a writer. Diana is so ghastly that she creates interesting ripples around the family, and even Edward begins to think about what he has done to Villy.
Howard has left her characters with lots of difficulties to surmount and this could be the making of them.They have some hard work ahead if they want a viable future and to provide for their children. The younger Cazalets have already realised this, but what of the older generation? Sadly we can only imagine what happens next, as Elizabeth Jane Howard passed away on 2 Janurary this year.
Posted by Caught Up in a Book at 13:42