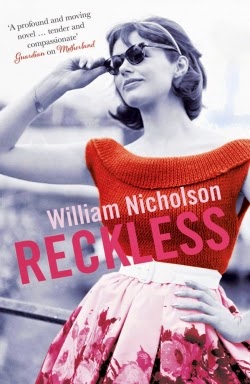 Many books I read take a bit of an effort to get into; you decide to allow them say fifty pages, and if they don't grab you by then, you put them aside. William Nicholson's novel, Reckless, had me hooked from page one. The novel recaptures the military and political stand-off over the Cuban missile crisis of 1962. Scenes include Kruschev and John Kennedy and British Chief of Defence, 'Dickie' Mountbatten.
The build up of tension is subtly done and the viewpoints flick from character to character - it would be easy to get lost, but Nicholson handles the whole thing deftly, keeping a lot of balls in the air and imagining the period so well. He does this through his three main characters.
Rupert Blundell is an advisor to Mountbatten, has been since the war, before which he was studying philosophy. He's very shy with women, even his outgoing colleague, Joyce, and has decided love and marriage are not for him. His philosophy gets in the way it seems - for how can any person really know the heart of another?
Rupert is forty-four when he meets Mary, whose lovely, open and desperately sad face attracts his attention while walking across St James's Park. A second meeting in the same spot leads him to rescue her from a kind of imprisonment at a convent. As a child she'd been the recipient of several visions, during which Christ called to her and said a great wind would bring about the world's end. It was the time of the bombing of Hiroshima and now with the Cuban missile crisis, the end of the world is a distinct possibility.
Rupert brings Mary to his friends, Hugo and Harriet, who have a young daughter. Harriet is often unwell, and Mary proves to be a godsend. The role of nanny/home help was supposed to fall to Pamela, the step-daughter of Hugo's business partner. Eighteen-year-old Pamela has begged to be allowed to live in London, and staying at Hugo's is a kind of compromise.
Pamela has envisaged for herself a romantic life involving a grand love affair, and dazzling the world with her gorgeousness.  She meets Stephen Ward at a very artistic cafe and he invites Pamela and her friends to a risqué nightclub. All at once Pamela is thrown into the hedonistic world of the idle rich, among them key players in what will erupt as the Profumo Affair. She learns, as one character points out, that society is full of 'lonely people looking for love and bored people looking for fun'.
Reckless gives a very vivid picture of a time when the world seemed on the precipice of disaster. Nicholson has done his homework and recreated scenes based on actual events and real people. But it is also very much the story of Rupert, Mary and Pamela, who are all immensely sympathetic. A number of the characters from Reckless appear in Nicholson's earlier book, the acclaimed Motherland, and have links to characters in The Secret Intensity of Everyday Life and All the Hopeful Lovers. I haven't read any of these as yet, but if they are anything like Reckless, they are sure to be full of warmth, wisdom and sharp observation and I have a wonderful treat in store.