A Cold Treachery by Charles Todd 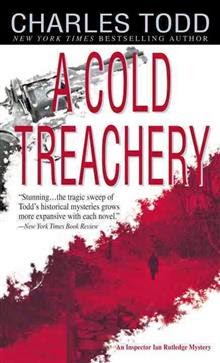 Charles Todd's Inspector Rutledge mystery novels are currently my go-to series for a diverting read when nothing much else catches my eye. I always enjoy the winning combination of smart plotting, a tortured but appealing protagonist (and his ghostly sidekick) plus an atmospheric setting. The period of Britain post World War One also gives these novels an edge.
In A Cold Treachery, Rutledge is sent to the town of Urskdale in the Lake District, where five family members, including two babies, have been shot dead, while a ten-year-old boy has run off into the snow. A large search party has gathered to hunt for young Josh Elcott, who is also on the list of suspects. But could a ten-year-old boy really murder his family?
It's a long cold journey in the snow, and it's nighttime - terribly easy to veer off the road - so it's lucky that Rutledge spots a carriage that has crashed, its horse distinctly dead. Rutledge rescues the wounded young woman inside and takes her to the nearest farmhouse. But why did she bring a gun with her and hide it under her carriage seat?
The terrain is rocky and dangerous to the uninitiated, so when Rutledge arrives in Urskdale, he leaves finding the boy to the townspeople, while he talks to witnesses about the family involved in the tragedy. Soon several motives arise.
The Elcotts were a happy family, but Grace Elcott was previously married in London with two young children. The war office declared her husband a war casualty and believing herself to be a widow she remarried. When her first husband surprisingly returned from a German POW camp, she was already pregnant with twins. Hugh Robinson has done the honourable thing - he and his former wife have become estranged, after all, but his relationship with the family remained cordial.
Gerald Elcott was also away at war, and his farm managed in the interim by his brother, Paul, whose attempts to run a pub in the village have never turned a profit. It seems possible he was jealous of his happily married brother, and would have liked the farm for himself. Rutledge's rescued damsel turns out to be none other than Janet, Grace Elcott's sister and she seems prepared to stitch up Paul Elcott for the murders. But could she have had a reason to kill the family herself?
It seems every character, including Rutledge's dipsomaniac landlady and her furtive husband has a secret. And while Rutledge ponders why any of them would go so far as murdering a family, drinking endless cups of tea, young Josh is still missing and likely dead from the cold. This gives the plot a bit of momentum while our determined police inspector is stymied by a dearth of clues and takes a while to make a breakthrough. The locals are a taciturn bunch and don't want him tramping about by himself in case he ends up needing rescuing himself.
A Cold Treachery is a classic whodunnit with plenty of troubled and quirky characters and a wonderfully realised setting. The cosy interior of the kitchen at Rutledge's guesthouse, the wild and rocky hills dotted with sheep, and the bleakly wintry lake are all vividly brought to the page as events build to a final showdown. Rutledge finally brings the killer to justice just when he is about to be replaced by a rival from Scotland Yard, and we all breathe a sigh of relief.