Sidney Chambers and the Problem of Evil by James Runcie 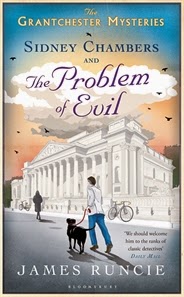 It takes a fair amount of confidence to tackle a plot involving a serial killer who targets priests within the confines of a short story. This may be the reason there are only four stories in the latest book of Grantchester Chronicles, so that Sidney can get to grips with some meatier cases.
As the title suggests, evil, and quite a lot besides, lurks in Sydney's thoughts as he becomes caught up in the first case, which has someone bumping off the local vicars. It all begins when a pair of dead doves is left on Sidney's doorstep. Soon after, the first vicar is killed, suffocated, and a claw-like symbol carved on his chest. Quite a grim beginning.
We have a dark and evil criminal for the first story, but there is still plenty of Sidney's episcopal ramblings of thought and quips from housekeeper Mrs Maguire, as well as the joys of Sidney's marriage to Hildegarde to lighten things up a bit. It's a pity Sidney's new domestic arrangements mean Mrs Maguire has to find employment elsewhere, because I always enjoyed her way of putting Sidney and his curate in their place.
The next story has a painting stolen in broad daylight from the Fitzwilliam Museum - a Sickert, showing a circus performer, and not the most valuable piece in the museum by a long stretch. Or does it have a particular value to the thief? And did the briefly naked French girl singing through the gallery have a connection with the heist?
This story is a bit more fun, with Sidney catching up with his old gal pal, posh Amanda, the art expert, and a trip across the channel with his backgammon buddy, Inspector Keating. It's amazing Keating is such a successful police officer, since he is often so bereft of clues, he frequently needs to call on Sidney to worm secrets out of witnesses with his cosy priestly manner.
The third story has the unlikely scenario of Sidney, along with his ageing dog Dickens, taking the part of the vicar in a film version of The Nine Tailors, one of Dorothy L Sayers more memorable whodunits. An army chum of Sidney's is the director, and of course there is plenty of off-set shenanigans plus a murder made out to seem an accident. This murder is particularly cunning, with a method I have never come across in my many years of mystery novel reading.
The fourth story is a bit shorter, and is a Christmas story involving the theft of a newborn baby, which gives Sidney many opportunities to ponder the birth of Jesus and miracle of new life. He'll follow his instincts and be more than usually sensitive to wrap this one up, while at home change is also afoot.
The Problem of Evil offers a collection of cosy mysteries, full of gentle wisdom and humour, with a background setting of early-sixties Britain. The Beatles are on the radio, the Cold War is in full swing, and there's loads of Cambridge atmosphere. I particularly like the pub where Sidney and Keating play backgammon and can only imagine what fun the people turning it all into a new television series will have.  It is sure to look gorgeous.