Turning the Stones by Debra Daley 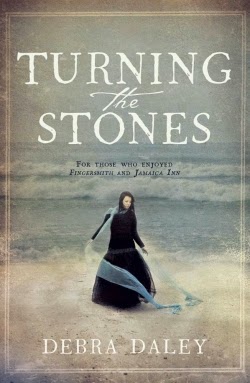 Turning the Stones could so easily have become an overwrought melodrama with its much thwarted but beautiful young heroine, a family that will do anything for easy money, a blackguardly smuggler with a heart of gold, a witch-like curse maker and a particularly nasty villain. But somehow Debra Daley's latest novel rises above all this to provide a stonking-good read.
The reason for this is her writing style is brisk yet evocative, plus it has that slightly Irish lyricism that can be so appealing, all of which comes through the voice of Em, its much put-upon heroine. Em wakes up groggily in a man's Mayfair house, bloodstained and wearing only her shift, having lost her memory of how she got there. Soon she discovers that she is locked in and that the only other occupant of the bedroom has had his throat slashed.
This is 1766, and Em will surely hang if she is caught, so hastily dressing she jumps out the window and flees, hoping to buy herself a passage to France with the purse she has found on the dead man's floor. Her escape and eventual rescue on the ship of Irish smuggler, Captain McDonagh, makes for a nail-biting bit of storytelling, which could have come out of a Stevenson novel.
Interwoven with the escape story however is that of Em's background. It takes you back to Sedge Court, the Cheshire home of the Waterlands, a snootily gentile family desperate to cling to a fortune that is ebbing away as Mr Waterland takes up one hopeless scheme after another. His bitter yet beautiful wife soon realises that she needs to ensure a good marriage for her dull and graceless  daughter Eliza. But Eliza is obviously overshadowed by smart, lovely Em, the foundling she has taken care of and raised as a daughter/companion for Eliza.
In a cruel twist of fate, Em is dumped into the servants quarters, and there is no more tutoring from the governess she has become attached to, just endless needlework and chores. Eliza's rakish brother, Johnny, has also noticed Em's obvious charms and makes plans to put them to good use. Everything is set on a collision course for the scene that Em wakes up to at the start of the book.
But we don't only have the two story threads of Em's past and her precarious future to keep track of, however. There's also the occasional visit to the house of Kitty Conneely in Connemara, who with her witch-like incantations - the turning the stones of the title - is determined to bring Nora's daughter home, whoever Nora might be. And it is no coincidence that the ship on board which Em has found a temporary respite is headed not for France, but disappointedly for Ireland.
Turning the Stones is a well-paced novel, full of dramatic scenes, nail-biting action and buried secrets, just as you'd expect, with shades of those early novels, Clarissa or Pamela (though I have read neither) by Samuel Richardson. The nicely turned writing balances out any tendency towards melodrama and its main character, Em, is superb - smart, witty and determined - as all good heroines should be. A surprisingly terrific read.