Man at the Helm by Nina Stibbe 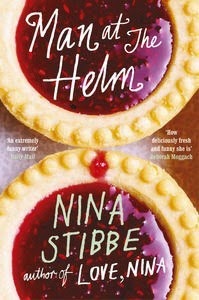 Humour can be so difficult to get right, but Nina Stibbe does it superbly in her novel, Man at the Helm, which is a kind of 1970s Love in a Cold Climate. The story is told by Lizzie Vogel, born with a silver spoon in her mouth, thanks to the fortune her father's business reels in.
Sadly her parents have fallen out of love - they were young iconoclasts together when they married, but the demands of the family business have turned Lizzie's dad into a different kind of person.
Divorce sees Lizzie and her mother, her sister and brother (Little Jack) packed off to a house in the country in Mrs Vogel's ancient Mercedes, Geraldine. It's a grand house, with a gardener, Mr Gummo, but it's too far to travel for housekeeper, Mrs Lunt, who hates children but makes wonderful jam tarts, and it is the end of the nanny era.
What's more the village is not ready for a divorcee among their ranks - even the vicar warns Mrs Vogel that while the family may attend services, she would not be eligible to join their women's fellowship group. The village families discourage their children from forming friendships with the Vogel children so it's just as well they have each other.
Mrs Vogel, sinks into the depths of despond, sun-bathing and becoming addicted to tranquillisers, which means not a lot of mothering, let alone housekeeping, happens. But she's still young and beautiful (shaking her hand causes men to fall in love with her) so the girls hatch a plan to find a new 'man at the helm'.
After much debate, the girls gradually add men to the list, most of whom are already married, but that seems to be no impediment.  They are after all desperate not to be made wards of court, and will try anyone. The vicar makes the list and even Mr Gummo - though only if all else fails. Which it nearly does, and love comes, as it always does, from the least likely direction.
Man at the Helm is a refreshing, delightful novel, gently humorous offering a steady stream of chuckles rather than uproarious hilarity. A lot of this is down to Stibbe's lovely use of language - whimsical and original - which she uses to create the narrative voice of ten-year-old Lizzie. And the 1970's era is nicely brought to life here, along with small town life. It's altogether more-ish, like Mrs Lunt's jam tarts, just the ticket for the silly season.
Posted by Caught Up in a Book at 23:44