The Last Train to Scarborough by Andrew Martin 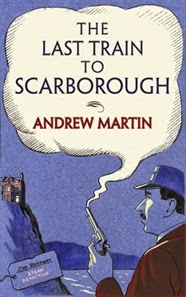 At the start of this novel, railway detective Jim Stringer wakes up in the dark to find himself lying on a pile of coal, unable to remember how he got there. He soon finds out he's on board a ship, the kind of jobbing steamship that runs from the north of England to the south. On top of that he's not too well, suffering terrible nausea, and the captain of the ship and his foreign sounding first mate seem set to kill him.
Change of chapter and suddenly the reader is with Jim and his family - 'the Missus' and his children, Harry and Sylvia (named after Sylvia Pankhurst, of course), at their new house on the edge of Thorpe on Ouse. It's a bigger house but the rent is reasonable, perhaps because the landlord has taken a bit of shine to Lydia, Jim's wife.
Lydia wants the family to get on in the world, and with that in mind, Jim is about to ditch railway policing for clerking in a law office, with the view to one day becoming a solicitor. He'll be James Stringer from now on, thank you.
But the Chief has one more case lined up for him, and this concerns the disappearance of a railway fireman (they're the ones that shovel in the coal to keep the engine running), who was spending a night at the Paradise Hotel in Scarborough. The case is months old, and the local police have been all over the guesthouse numerous times, but no one can account for the whereabouts of Raymond Blackburn, a strong, handsome, silent type with a fiancee waiting for him.
The Chief sends Jim off undercover as a fireman to the Chief's rifle-club pal, Tommy Nugent, a chatty, nervous driver with guns in his luggage, just in case. The Paradise advertises itself as economical accommodation for railwaymen, and Jim finds himself in Blackburn's old room at the top of the stairs.
The off-season hotel offers a bunch of suspects: a beautiful but flirtatious landlady and her 'slow' but powerfully built brother who has a fascination for newspaper articles about railway accidents. The other two guests are equally peculiar: Howard Fielding, a finely dressed older gent with a taste for fine wine and cigars who is oddly enough in the railway postcard business with fellow guest, Theo Vaughan. Theo is nowhere as flash and is hoping to branch out into a more racy and potentially more lucrative line of postcards as he soon reveals to Jim in an amusing scene at a local pub.
As usual there is a load of scope for humorous banter among the inmates with their oddly contrasting characteristics and Jim's need for information. These scenes are interwoven with ones on board the coal steamer that has become Jim's prison. Here there is no comfort and Jim's health more and more precarious. The reader can only wonder how he is going to get himself out of this one.
The Last Train to Scarborough is another terrific story in the Jim Stringer series. There's still plenty of railway detail to keep the train buffs amused, but if you don't know a thing about it all, the story still rattles along with loads of pace and that wonderful north of England style. With this instalment we are in March of 1914, and only too aware that Jim will be a long way from home in the next book in the series, The Somme Stations. It's bound to be a corker!
Posted by Caught Up in a Book at 14:24